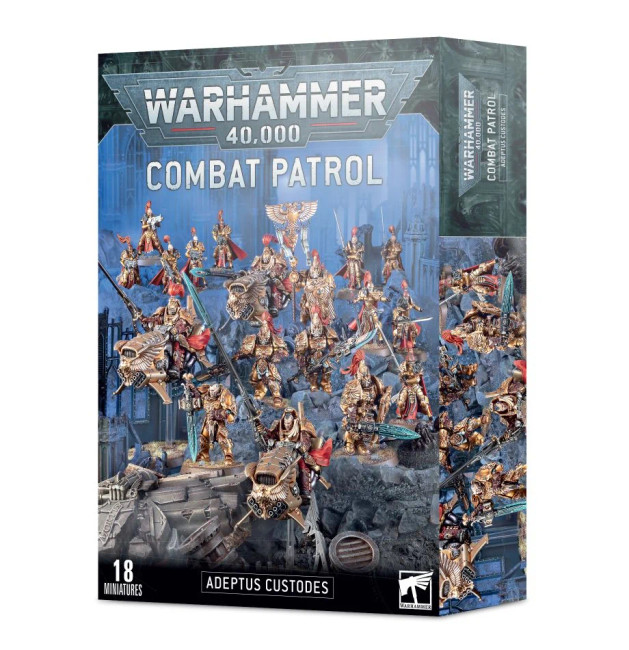 Resplendent in gleaming gold, the Adeptus Custodes stride into war with the confidence earned through ten millennia of martial superiority. Bullets and shrapnel ricochet from gilded auramite breastplates – these warriors are armoured with the finest wargear, carrying the blessing of the God-Emperor Himself. When combined with the peerless anti-psychic protection provided by the Sisters of Silence, there are few in the galaxy who can withstand them.

Lay waste to the enemies of the Imperium with Combat Patrol: Adeptus Custodes. If you're looking for an effective way to start up a new army or to dramatically boost your existing collection, this box is it. A Vexilius Praetor heralds the arrival of the Emperor's wrath and calls his comrades, led by a Shield Captain, to feats of glory. Custodian Guard charge down the foe with spear and sword, while Vertus Praetors – magnificent warriors mounted upon ancient Dawneagle jetbikes – streak across the battlefield. And all the while, fighting in eerie quiet, the Sisters of Silence hold at bay the sorcerous powers of the warp.

The selection of units is perfect for a balanced Combat Patrol-sized force of roughly 25 Power Level, but the models in these units can also build a variety of alternatives, making this box incredibly versatile for both new and established players of the Talons of the Emperor. Plus, you'll save money over buying everything separately – the Emperor provides!

This set includes the following multipart plastic models:
– 1x Shield Captain
– 1x Vexilius Praetor
– 3x Custodian Guard
– 3x Vertus Praetors, one of which can be build as a Shield-Captain on Dawneagle Jetbike
– 10x Sisters of Silence Prosecutors, which can also be built as Vigilators or Witchseekers
– 2x Burning of Prospero transfer sheets, which include insignia for the Talons of the Emperor

All models are supplied with their appropriate bases.

Designed to make it easier to keep track of Tactical Objectives, and Stratagems in games of Warhamme

Release Date 15th Jan 2022   By the Emperor! Grab these dice, specially themed to match your Ad

Release Date 21st May 2022 A Blade Champion is a living weapon in the Emperor’s hand. His role is to

Description The perfect Starter Paint set for any wargaming system. All the base colours you