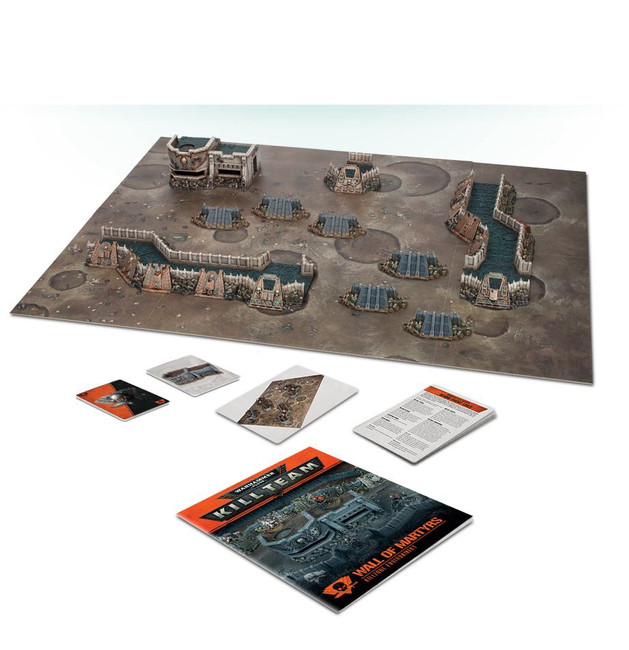 On apocalyptic war worlds and amidst savagely contested galactic strongholds, miles-long trench lines stretch to the horizon studded with bunkers, weapons batteries and redoubts. Mighty bulwarks of stone and steel loom forth from the shattered earth, resisting the onslaught of foes and providing shelter for those who know only war.

The Wall of Martyrs Killzone Environment is an expansion for Kill Team – in the packed box, you’ll find a gameboard, scenery, and exclusive rules that use the unique nature of the Wall of Martyrs terrain to introduce dangerous new missions and powerful effects to your games. Included:

- A double-sided Kill Team gameboard measuring 22” x 30”, printed on heavy, durable card stock. 1 side depicts an urban environment with a street bisecting sets of ruins, and the other an open plain pock-marked by craters;
- An 8-page booklet containing descriptions of the trenches and fortifications used across the Imperium to hold back aggressors, the manner in which kill teams use these networks of defences to their advantage, and an example of a Wall of martyrs environment built from the scenery included in the box;
- 12 Wall of Martyrs Tactics cards – these can be used by any Kill Team faction, with 7 cards providing interactions with the Wall of Martyrs scenery and 5 being used specifically by Scout, Comms, Veteran or Leader Specialists;
- A Wall of Martyrs Environment card, which provides 6 different rules allowing interaction – positive and negative – with the scenery;
- 4 Wall of Martyrs Mission cards – designed to be used in conjunction with the gameboard and scenery, this is a set of 2 Matched Play missions and 2 Narrative Play missions, which are split between attacker and defender;
- An Imperial Bunker, a set of 2 Imperial Defence Lines and an Imperial Defence Placement – these miniatures are supplied on dark grey plastic.

The immense supply districts known as Sectors Munitorum can be found across the Imperium of Mankind.