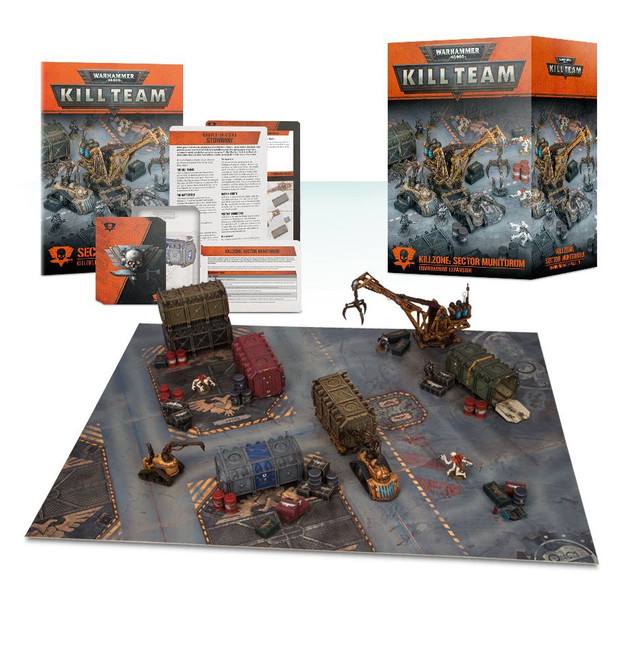 The immense supply districts known as Sectors Munitorum can be found across the Imperium of Mankind. They house the resources needed to power Humanity ‘s vast armies; millions of tonnes of munitions, equipment, weapons and fuel. Such priceless stockpiles draw the eyes of avaricious raiders, leading to brutal, close-quarter battles amidst looming canyons of rusted containers.

The Sector Munitorum Killzone Environment is an expansion for Kill Team – in the packed box, you’ll find a gameboard, scenery, and exclusive rules that use the unique nature of Sector Munitorum terrain to introduce dangerous new missions and powerful effects to your games. Included:

- A double-sided Kill Team gameboard measuring 22” x 30”, printed on heavy, durable card stock. 1 side depicts a Zone Munitorum, a large storage facility perfect for arrangements of Munitorum scenery; and the other an Imperial Sector, an area of war-torn city;
- 12 Sector Munitorum Tactics cards – these can be used by any Kill Team faction, with 6 cards providing interactions with the Sector Munitorum scenery and 6 being used specifically by Heavy, Medic, Comms, or Demolitions Specialists;
- A Sector Munitorum Environment card, which provides 6 different rules allowing interaction – positive and negative – with the scenery;
- 4 Sector Munitorum Mission cards – designed to be used in conjunction with the gameboard and scenery, this is a set of 2 Matched Play missions and 2 Narrative Play missions, which are split between attacker and defender;
- 2 sets of 3 Munitorum Armoured Containers – each of these includes 9 promethium barrels and 12 supply crates, with the option to equip the Containers with watchful storm bolters, ready to annihilate Kill Teams looking to raid them. Also in the box is a set of Galvanic Servohaulers – these are 2 tracked vehicles with powerful engines, designed to haul around industrial equipment such as the included crane, a skeletal metal structure featuring a 3-clawed grabber;
- An 8-page booklet describing the Sectors Munitorum, with an example of a fully-painted scenery set.

At the farthest reaches of space, the boundaries of the Imperium change almost daily as new worlds a

The immense supply districts known as Sectors Munitorum can be found across the Imperium of Mankind.

At the farthest reaches of space, the boundaries of the Imperium change almost daily as new worlds a