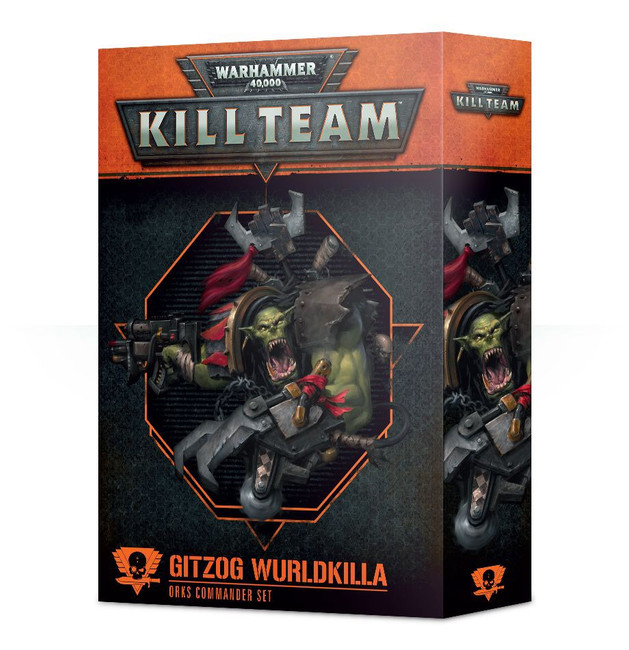 Gitzog Wurldkilla has had enough of his vanguard forces having all the fun. Rumours have circulated back to him that his old mate Krogskull has got ahead of him and is burning stuff before it can be properly looted. Gitzog knows his Waaagh! will lose momentum if all the good scrap sites are on fire, so it’s time to bash some heads together and get everyone back in line. Anyone in his way will be shot, eaten by his squiggy beast Redfangz or cut to chunks by his shearing power klaw.

Add a Commander – a powerful hero character with unique abilities and rules – to your Ork kill team with this set. It contains a multipart plastic Warboss miniature, a set of cards packed with exclusive rules and a sheet of tokens for use in-game:

- An Ork Warboss: this multipart plastic kit represents Gitzog Wurldkilla – or the Commander of any Ork Kill Team you wish – a tall, muscular and imposing sight even by Ork standards, accompanied by a large, impressively-betoothed squig and clutching a kombi-weapon in one hand, the other replaced entirely by a vicious power klaw.
- A datacard for Gitzog Wurldkilla, featuring his characteristics, weapons, abilities and specialisms, along with a card featuring his background
- A card featuring Gitzog Wurldkilla’s skill tree – Warboss specialisms which can only be used by that character
- 5 Ork Commander Tactics cards, including 2 Tactics exclusive to this set
- A sheet of tokens for use in games of Kill Team – this includes 1 Move/Charge token, 1 Fall Back/Advance token, 1 Ready/Shoot token, 6 Tactic/psychic power tokens, 3 wound tokens, and 3 objective tokens.