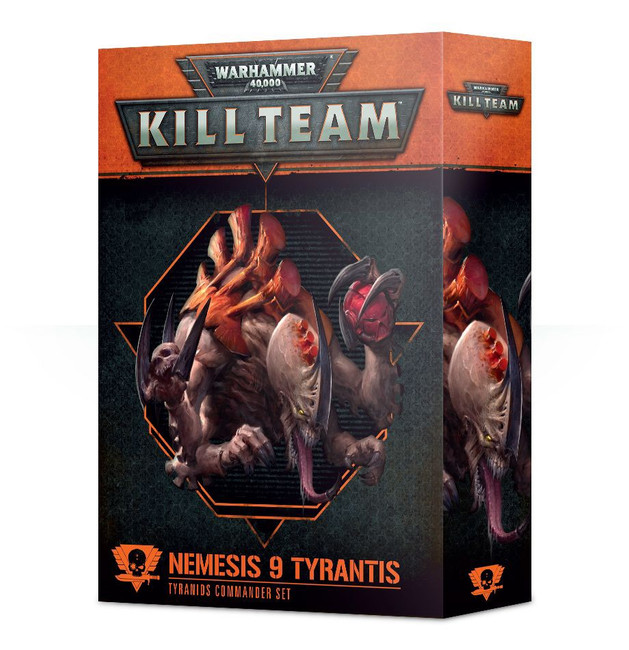 The bioform codified by the Inquisition as Nemesis 9 Tyrantis is a true horror. It prizes terror so highly it likes to leave one prey-creature from each group of victims alive so they might spread their fear to the common herd of Vigilus like a virus. Nemesis 9 Tyrantis has on more than one occasion been mistaken for the leader of the planet’s Genestealer Cult infestation – however, so long as the Broodlord gets to feed on the minds and bodies of the populace, it cares little for the chatterings of ambulatory biomass.

Add a Commander – a powerful hero character with unique abilities and rules – to your Tyranid kill team with this set. It contains a multipart plastic Broodlord miniature, a set of cards packed with exclusive rules and a sheet of tokens for use in-game:

- A Broodlord: this multipart plastic kit is used to represent Nemesis 9 Tyrantis – or the Commander of any Tyranid kill team you wish – standing atop a chitinous structure, poised ready to strike with his truly horrifying monstrous rending claws, his maw open and showing off rows of sharp fangs
- A datacard for Nemesis 9 Tyrantis, featuring its characteristics, weapons, abilities and specialisms, along with a card featuring his background
- A card featuring Nemesis 9 Tyrantis’ skill tree – Broodlord specialisms which can only be used by that character
- 3 Hive Mind Discipline psychic power cards
- 3 Tyranid Commander Tactics Cards, including 2 Tactics exclusive to this set
- A sheet of tokens for use in games of Kill Team – this includes 1 Move/Charge token, 1 Fall Back/Advance token, 1 Ready/Shoot token, 6 Tactic/psychic power tokens, 3 wound tokens, and 3 objective tokens.