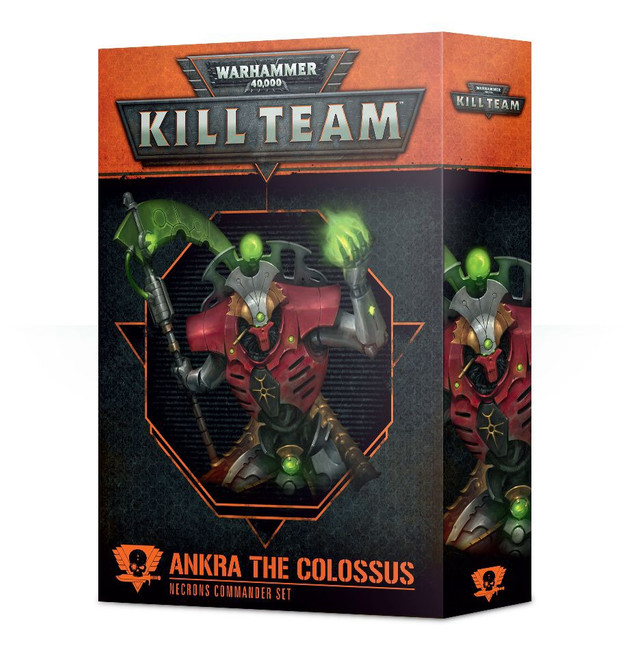 The towering Necron Overlord known as Ankra the Colossus never forgives a slight, and as he possesses a body of immortal metal, has had time enough to repay nearly every insult dealt against him. His current vendetta is against the T’au of Omis Prion, who have foolishly interrupted his search for the laboratories of the Triumvirate of the Crimson Sceptre. Ankra has resolved to settle this matter in person, telling himself it will be more efficient that way – though in truth, it is just as likely he wishes to feel the splash of hot blood upon his metal body once more.

Add a Commander – a powerful hero character with unique abilities and rules – to your Necron kill team with this set. It contains a multipart plastic Overlord miniature, a set of cards packed with exclusive rules and a sheet of tokens for use in-game:

- An Overlord: this multipart plastic kit is used to represent Ankra the Colossus – or the Commander of any Necron kill team you wish. Posed with the kind of triumphant attitude you can only really get from millennia of slaughter, he wields a voidscythe and resurrection orb.
- A datacard for Ankra the Colossus, featuring its characteristics, weapons, abilities and specialisms, along with a card featuring his background
- A card featuring Ankra the Colossus’ skill tree – Overlord specialisms which can only be used by that character
- 6 Necron Commander Tactics Cards, including 2 Tactics exclusive to this set
- A sheet of tokens for use in games of Kill Team – this includes 1 Move/Charge token, 1 Fall Back/Advance token, 1 Ready/Shoot token, 6 Tactic/psychic power tokens, 3 wound tokens, and 3 objective tokens.

Release Date 20th October 2018   Some warriors are destined to bear the mantle of command. Whether h

Hidden among the ruins of the Mortal Realms thrive the Flesh-eater Courts. Trapped within a horrific

Relentless and unstoppable, existing only to destroy, these Daemons are the deadly foot soldiers of

For sixty million years the Necrons have slumbered, their tomb worlds filled with dormant armies and