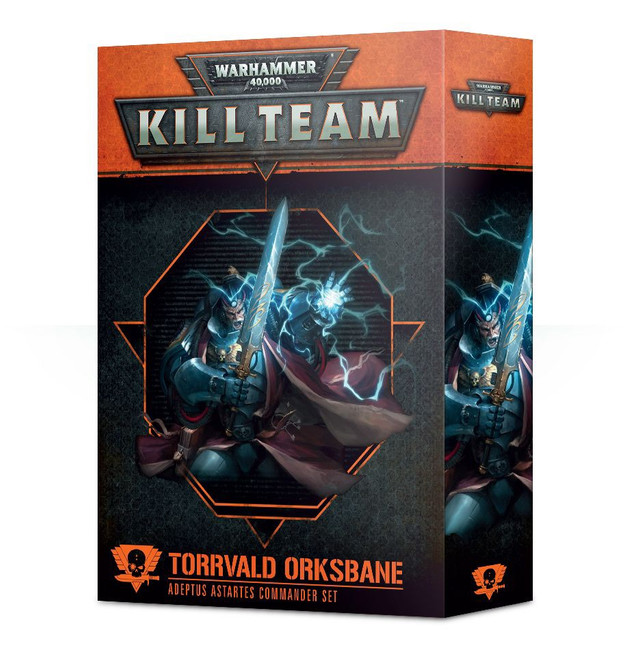 Torrvald Orksbane is a psyker of impressive power, able to conjure blizzards of destructive energy from the air and send bolts of freezing cold crackling from his fingertips. He has a knack for hunting Orks, saying he can ‘see’ their raw aggression on the wind – as a Space Wolf his every sense is sharpened, and as a Librarian, that includes those beyond mortal capabilities. When the force fields that protected Megaborealis went down, Torrvald lived up to his name, seeking out the Reivers known as the Fangs of Ulfrich before taking the fight to the Orks in the borer-hives.

Add a Commander – a powerful hero character with unique abilities and rules – to your Adeptus Astartes kill team with this set. It contains a multipart plastic Primaris Librarian miniature, a set of cards packed with exclusive rules and a sheet of tokens for use in-game:

- A Primaris Librarian: this multipart plastic kit is used to represent Torrvald Orksbane – or the Commander of any Adeptus Astartes kill team you wish – clad in Mk X power armour, with many elaborate accoutrements, from his ornate multi-layered cloak to the detailed wiring of his psychic hood, armed with a force sword in his right hand and a holstered bolt pistol
- A datacard for Torrvald Orksbane, featuring his characteristics, weapons, abilities and specialisms, along with a card featuring his background
- A card featuring Torrvald Orksbane’s skill tree – Primaris Librarian specialisms which can only be used by that character
- 4 Librarius Discipline psychic power cards, including the exclusive Stormcaller psychic power
- 5 Adeptus Astartes Commander Tactics Cards, including 2 Tactics exclusive to this set
- A sheet of tokens for use in games of Kill Team – this includes 1 Move/Charge token, 1 Fall Back/Advance token, 1 Ready/Shoot token, 6 Tactic/psychic power tokens, 3 wound tokens, and 3 objective tokens.

Release Date 20th October 2018   Some warriors are destined to bear the mantle of command. Whether h