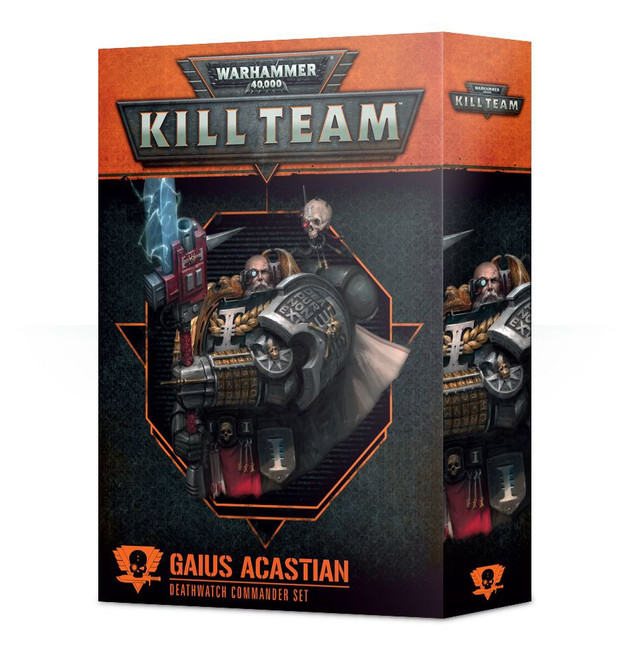 Even before he rose to lead a brotherhood of the Deathwatch, Acastian of the Ultramarines was known for his calculating demeanour. It is said that he can calculate the number of warriors needed for a victory with but a quick glance at the battlefield. With the resources of an entire Watch Fortress at his disposal, he has waged war in the Vigilus System, personally leading 8 missions to victory, most recently crossing swords with the Drukhari.

Add a Commander – a powerful hero character with unique abilities and rules – to your Deathwatch kill team with this set. It contains a multipart plastic Watch Master miniature, a set of cards packed with exclusive rules and a sheet of tokens for use in-game:

- A Watch Master: this multipart plastic kit represents Gaius Acastian – or the Commander of any Deathwatch Kill Team. Wielding a guardian spear and a clavis – a device which can interact positively or negatively with any machine the Watch Master turns his attention to – he wears heavy Deathwatch armour and stares impassively through an optical implant that dominates his face.
- A datacard for Gaius Acastian, featuring his characteristics, weapons, abilities and specialisms, along with a card featuring his background
- A card featuring Gaius Acastian’s skill tree – Watch Master specialisms which can only be used by that character
- 3 Librarius Discipline psychic power cards
- 6 Deathwatch Commander Tactics cards, including 2 Tactics exclusive to this set
- A sheet of tokens for use in games of Kill Team – this includes 1 Move/Charge token, 1 Fall Back/Advance token, 1 Ready/Shoot token, 6 Tactic/psychic power tokens, 3 wound tokens, and 3 objective tokens