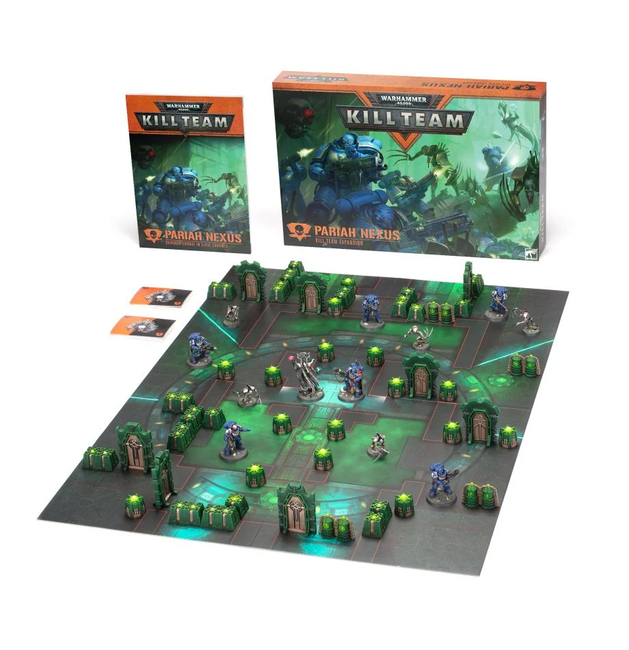 or make 4 interest-free payments of $78.50 NZD fortnightly with

In the grim darkness of the 41st Millennium, specially selected bands of elite combat operatives hunt each other through a twisting alien tomb…The Pariah Nexus, a growing area of space in which worlds have been silenced, baffles and disturbs the Imperium. Within this region, Space Marines of the Ultramarines Chapter wage a desperate war to retake the Imperial world of Vertigus II from the soulless Necron legions of the Szarekhan Dynasty.Elite Ultramarine kill teams descend into the bowels of the mining world, seeking to destroy their power sources and disrupt the Necrons' fell purpose. A vast network of sepulchral alien passages lies between them and their goal. Dangerous firefights and lethal close-quarters clashes erupt in the claustrophobic confines as both sides use every deadly pitfall to outmanoeuvre their enemy.Take your games of Warhammer 40,000: Kill Team beneath the surface of a Necrons tomb world in this expansion for the game. As well as a double-sided board and themed terrain, it includes two kill teams – Primaris Space Marines and Necrons – each led by a powerful Commander.You'll also get a book that includes full rules for fighting battles in the close confines of buildings, starships, and twisting alien labyrinths, not to mention fully updated rules for Space Marines and Necrons kill teams, including datasheets for a host of new models released alongside the latest edition of Warhammer 40,000.This boxed set contains everything you need to take your Warhammer 40,000: Kill Team games into the depths of a Necrons tomb world:– Plastic Space Marines kill team consisting of a Captain with master-crafted heavy bolt rifle and five Heavy Intercessors– Plastic Necrons kill team consisting of a Chronomancer and five Flayed Ones– Double-sided game board measuring 22"" x 30"" representing two areas of a Necrons tomb complex– 48 pieces of Necrons-themed terrain, including 8 doors, 4 induction diodes, 8 single quantum nodes, 12 double quantum nodes, and 16 thermionic annuluses.– 112-page Kill Team: Pariah Nexus softback book, containing extensive background, rules for playing games of Kill Team in the ultra-close confines of indoor environments, and updated rules for using Space Marines and Necrons in Kill Team, including datasheets, tactics, and more– Two decks of 17 objective cards– Space Marines transfer sheetThis set also contains seven 40mm round bases and five 28.5mm round bases.

You will need a copy of the Warhammer 40,000: Kill Team Core Manual to make use of the contents of this boxed set.

While many kill teams, such as those of the Deathwatch Space Marines, are made up of hand-picked, sp

In the Chaos-tainted wastes of the Eightpoints, a bitter struggle rages for control of varanite – a

While many kill teams, such as those of the Deathwatch Space Marines, are made up of hand-picked, sp

Many of the Dawnbringer Crusades survived to establish new outposts for the forces of Order, with so