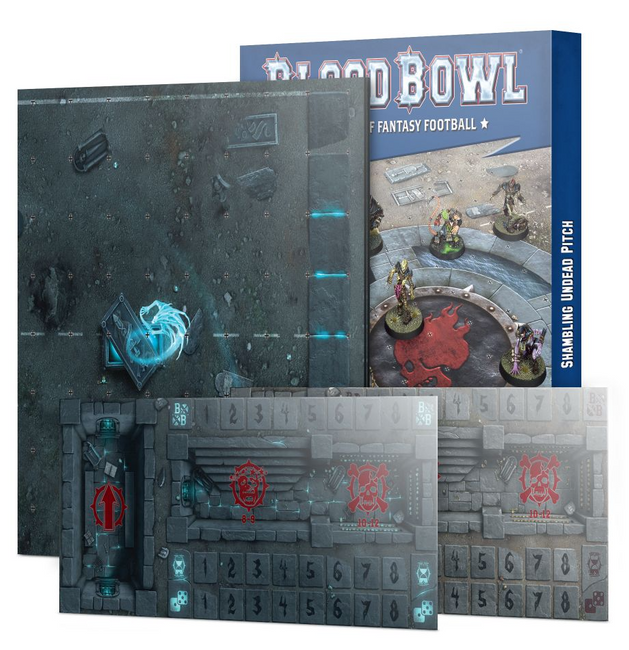 or make 4 interest-free payments of $23.00 NZD fortnightly with

Many Shambling Undead teams set up their games in graveyards. Necromancers like the company of the dead, so it is only natural that they are attracted to such places, not to mention the ready source of reserve players that can be found with the simple turn of a shovel. What's more, many Undead teams prefer to play its fixtures under the moonlight, refusing to come onto the pitch for the kick-off until the sun has begun to set, making for a truly spooky experience for visiting teams.One side of this pitch represents a sombre graveyard, replete with stone tombs, grave markers, and the flaming skull icon of the Shambling Undead. The other side features the same pitch but in a chilling night-time scene. The ethereal spirits of the dead glow in the moonlight, and necromantic energy can be seen emanating all across the pitch.

You'll also find a pair of matching double-sided dugouts to complete the theme. Redesigned for the latest edition of the game, each dugout features score, turn, and re-roll trackers, plus Reserves, Knocked-out, and Casualty boxes. Rules to use each side of the pitch are included.

A double-sided card Blood Bowl pitch, complete with matching dug-outs, this is the perfect place for

The jungles of the New World are riddled with the remains of ancient temples, built by the Lizardmen

Updated for the current ruleset, this deck of 44 cards will help you keep track of stats and profile

Release Date 31st July 2021   Dauntless warriors of the Redeemer conclaves, the Vindictors are the s