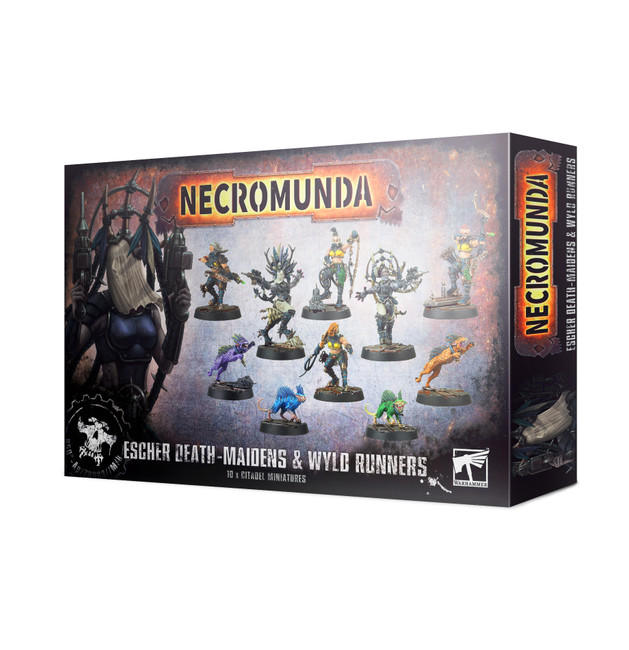 Death Maidens and Wyld Runners represent the two ends of the Escher lifecycle. All Escher adolescents grow up in the Wyld, learning everything they need to know about hive life free from the oppressive societies imposed by most other Clan Houses. As they come of age, they either join the clan or become Wyld Runners, reckless and bold explorers and beast wranglers. Death Maidens are fallen warriors of the Escher, raised from their graves in order to seek revenge for the House of Blades.Expand your Escher gang with these six fighters and their cute but deadly pets. Wyld Runners may be armed with low-tech weaponry, in the form of whips and bows, but are no less lethal for it. Death Maidens come armed with a needle pistol and venom claw, allowing them to kill their enemies with the finest poisons from the House of Blades.This 138-part plastic kit makes:– 2x Death Maidens with needle pistols and venom claws– 4x Wyld Runners, two with wyld bows and two with whips– 4x PhelynxThis kit is a treat for customisers and converters. Each Phelynx can be kitted out with a choice of interchangeable heads, while the Death Maidens and Wyld Runners feature the same arm and head fittings as the Escher Gang kit, allowing you to mix and match them for greater variety!It is supplied with 10 Necromunda 25mm round bases.Rules for using these models in games of Necromunda can be found in House of Blades.

Used to block off corridors and lines of sight in games of Necromunda Underhive, Bulkhead Doors are

House Escher is unique among the great Houses of Necromunda, for its gangs are made up entirely of w

Masters of pharmaceuticals and chemical manipulation, what Eschers may lack in terms of raw physical

Masters of prediction, the Farseers are the strangest and most visionary of a craftworld's advisors.

Release Date 15th Feb 2020   Are you looking to kick off a Genestealer Cults force? Then look no fur

Warriors of the Kabals form the beating heart of each Drukhari strike force. They are the cruellest

In the craft of murder, Wyches have no equal. In battle, Wyches feed upon screams of pain. With comb

Atalan Jackals are fourth generation Neophytes who form the outriders of their gene-sect. They roam

Cleansing flame is the principal weapon of the Silent Sisterhood’s Witchseeker Squads, for in the ho