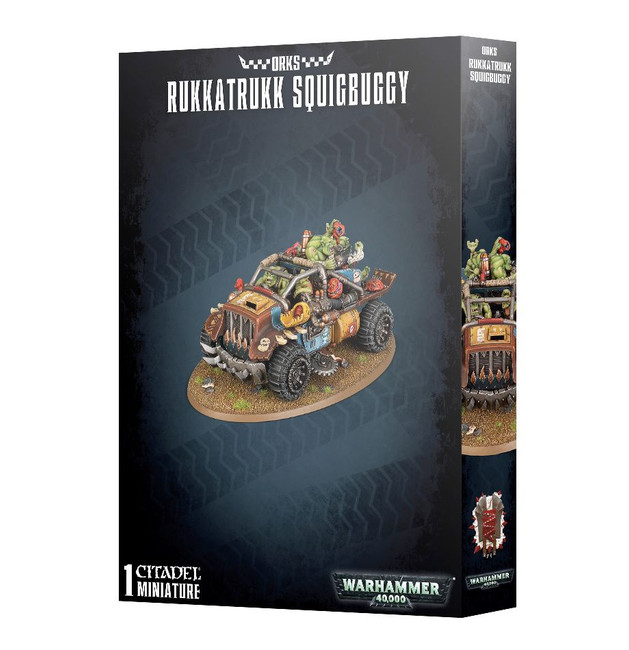 Often seen muscling their way through their fellow Speed Freeks as they roar toward the front lines, Rukkatrukk Squigbuggies employ living close-range artillery to wreak havoc amongst the enemy ranks. They launch a variety of squiggly beasts at the hapless foe: bitey squigs, which latch on to the first thing they hit and don’t stop chewing until they are bludgeoned to death; bile squigs which squirt, spray or vomit a variety of hilariously harmful fluids in every direction; and boom squigs that explode violently at the first sign of provocation, ostensibly to ‘warn off predators’. These are hurled out via squig launchas, which are tossed about between crew members in order to quickly deliver the perfect squig – the squealing, thrashing and booming audible over the Squigbuggy’s throaty roar.This multipart plastic kit contains the components necessary to assemble a Rukkatrukk Squigbuggy. Notably rugged in construction for an Ork vehicle – while still bearing the ramshackle hallmarks of a machine built by Meks with more hammers than sense – the Squigbuggy is a flatbed truck with a long, wide wheelbase, which allows it to zoom over rough terrain mostly without flipping over disastrously. The flatbed itself contains a squig pen overflowing with all manner of bitey, bile and boom squigs, overseen by a grot (who, honestly, is having a pretty hard time keeping the squigs under control). A large Ork balances precariously by the pen, stuffing a squig into the heavy squig launcher he’s wrestling into position. Below the flatbed are 2 fuel tanks – not especially well protected from impact – and a set of saw blades either side, perfect for shredding tyres and enemies. In the cockpit, which is effectively just a few bits of scaffold over a steering wheel, sit the driver and another crew member. Both are covered in the bite marks, scratches and scars that come with a career in squig-wrangling, with the Ork riding shotgun leaning hard on the firing mechanism of his squig launcha. At the front, the Squigbuggy features a huge toothed maw in lieu of a grill – this is rounded off nicely by a spiky ram. This kit comes as 61 components and is supplied with a Citadel 150mm Oval base.

Gretchin mobs make up for their shocking lack of quality with sheer quantity. The natural cowardice

When a Chaplain takes to the field on a Raider-pattern bike, he is able to keep pace with even the s

The Invader is a highly flexible all-terrain vehicle, perfectly adapted to an aggressive reconnaissa

Painboys are at home amongst the blood and horror of the battlefield, eagerly patching up lost limbs

The Sanguinary Priests are the Apothecaries of the Blood Angels, charged with preserving the Chapter