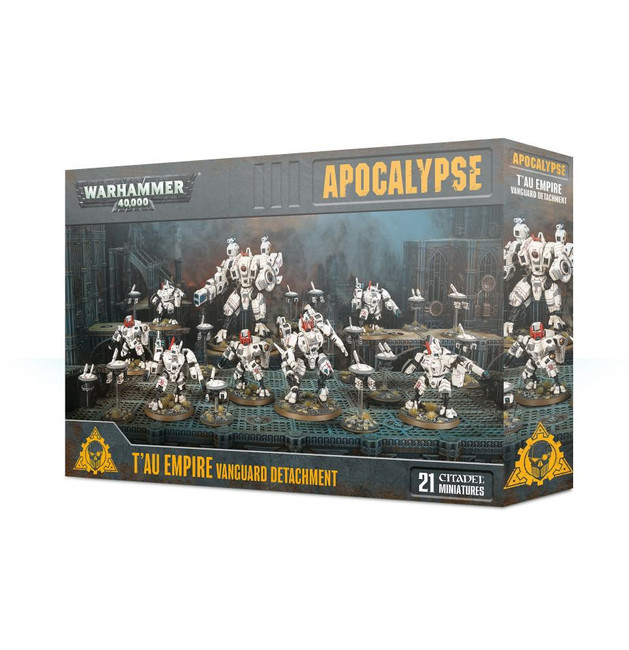 The T’au Empire spread their enlightened ways across the galaxy, annihilating those who do not willingly bow down to the Greater Good. T’au Commanders lead from the fore, issuing orders as they descend into the fray. At their commands, XV8 Crisis Battlesuits and Tactical Drones provide a highly mobile base of fire, while towering XV104 Riptide Battlesuits unleash mass destruction upon enemy formations. Comprising everything you'll need and more to form a Vanguard Detachment in Warhammer 40,000: Apocalypse (or to kick-start your T’au Empire collection with a bang), the T’au Empire Vanguard Detachment set includes your three mandatory Elites units as well as an HQ choice to lead it. As a Character, the T’au Empire Commander can also serve as the Detachment’s Warlord, enabling you to generate an additional Command Asset each turn. A T’au Empire Vanguard Detachment includes the following multipart plastic kits: - 1 x T’au Empire Commander (Supplied with a Citadel 60mm Round Base, and including 1 Tactical Drone, supplied with a Citadel Flying Stem with 32mm Flying Base, the Commander can be assembled in either a XV-85 Enforcer Armour Crisis Battlesuit or an XV86 Coldstar Battlesuit.) - 2 x XV8 Crisis Battlesuit Teams (6 XV8 Crisis Battlesuits, each supplied with a 50mm Citadel Round Base. Includes 12 Tactical Drones, each supplied with a Citadel Flying Stem with 32mm Flying Base.) - 1 x XV104 Riptide Battlesuit (Supplied with a Citadel 120x92mm Oval Base) - 2 x T’au Empire Infantry Transfer Sheets Warhammer 40,000 rules for these units can all be found in Codex: T’au Empire, while a pdf with their Apocalypse datasheets can be downloaded for free from Warhammer40000.com/Apocalypse/Datasheets

Broaden the borders of the T'au Empire and spread the greater good with these themed dice. Every six

Using speed, genius tactics and overwhelming firepower to spread their message of the Greater Good a

Release Date 2nd April 2022   The Aeldari once ruled the galaxy, before their civilisation collapsed

So few in number are the Asuryani that every citizen must train for war, in case they should one day

The T'au Empire are a fledgling race in the grand scheme of things, thrusting out into the stars to