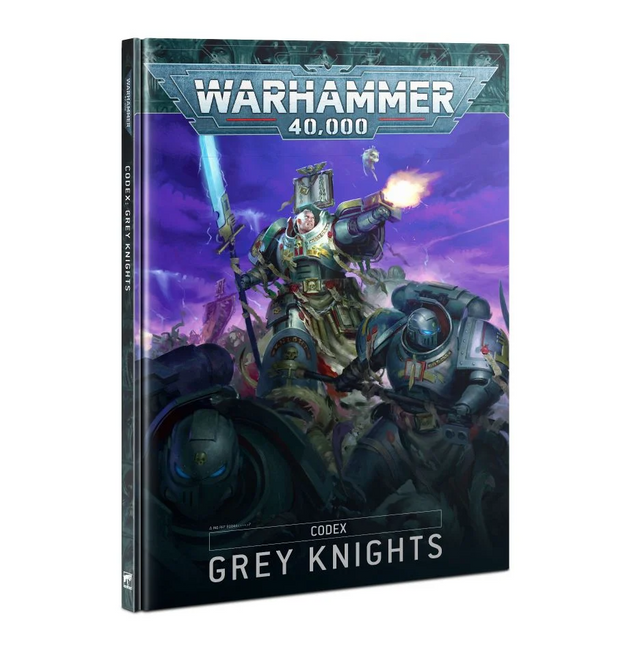 The most mysterious of the Emperor’s servants, the Grey Knights are a unique Chapter of Space Marines. Each is an elite warrior-mystic clad in sigil-scribed power armour and wielding archaic weapons through which they channel their otherworldly abilities. They are a purified order, incorruptible and possessed of iron fortitude. They have to be, for the Grey Knights face down the most nightmarish horrors from the seething depths of the warp: the Daemons of Chaos. Their Brotherhoods use the shifting immaterium to their advantage, drawing on it to direct coruscating energies and outmanoeuvring their foes through pinpoint teleportation. Their warriors unleash a storm of firepower, supported by sanctified battle tanks, gunships, and giant warsuits whose psychic weapons can banish the greatest of Daemons back into the warp.The secretive and sinister 666th Chapter of Space Marines are a force of elite warriors, even beyond their Adeptus Astartes kin. Each member of the Chapter has an affinity for the powers of the warp, and they can channel their gifts in battle to blast their foes apart with bolts of energy as well as the might of their arms. Clad in power armour of unusual design, and armed with weapons of rare potency, this small but deadly army strikes from their hidden base on Titan, more than a match for the strongest enemies the Imperium must face.Inside this 112-page book, you'll find:- The clandestine legacy of the Grey Knights, including their myth-shrouded founding and classified operations throughout the history of the Imperium- A guide to the unorthodox organisation and heraldry of the Grey Knights and their various Brotherhoods- A Grey Knights bestiary with background details for every unit and Character featured- A showcase of stunningly painted Citadel miniatures- Rules for units that are available to the armies of the Grey Knights – including 32 datasheets- Stratagems, Relics, and optional secondary objectives that illustrate the mystifying goals and remarkable tactics of the Grey Knights- A Crusade section providing Agendas, Crusade Relics, Battle Traits, Requisitions, Psychic Fortitudes, Honoured Titles, and unique Daemonic Nemesis rules- Loads more

You will need a copy of the Warhammer 40,000 rulebook to use the rules included in this codex.

Chanting rites of banishment, the elite brotherhoods of the Grey Knights stride fearlessly into batt

The Adepta Sororitas are the Chamber Militant, or armed fighting force, of the Adeptus Ministorum. O

There are many horrific alien threats to be found among the stars, and the Orks are some of the very

Infantry Squads form the backbone of the Astra Militarum, and countless billions of soldiers fight a

Made up of innumerable billions of soldiers from a million different worlds, the Astra Militarum is,