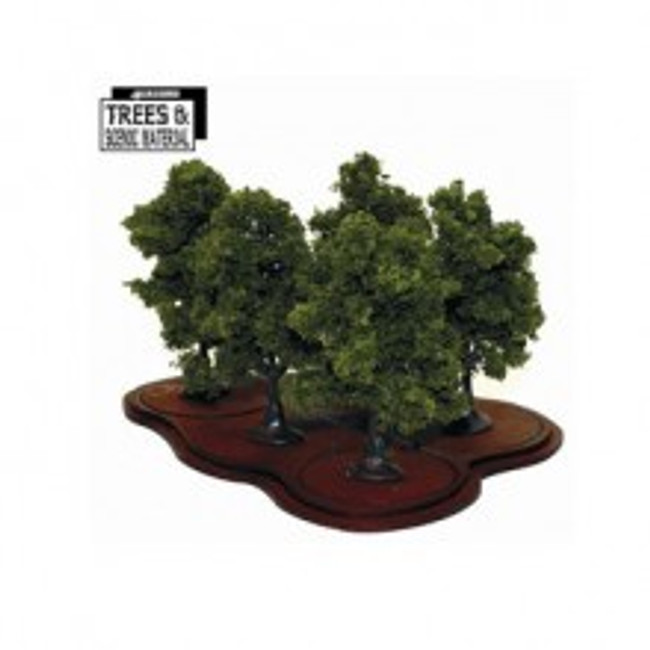 TMS-107 these Young Ash Trees are part of our Trees & Scenic Material range, it is suitable for 28mm, 15mm  and 10mm games.Fraxinus is a genus of flowering plants in the olive and lilac family, Oleaceae. It contains 45–65 species of usually medium to large trees, mostly deciduous though a few subtropical species are evergreen. The genus is widespread across much of Europe, Asia and North America.The tree's common English name, ash, goes back to the Old English æsc, while the generic name originated in Latin. Both words also meant "spear" in their respective languages. The leaves are opposite (rarely in whorls of three), and mostly pinnately compound, simple in a few species. The seeds, popularly known as keys or helicopter seeds, are a type of fruit known as a samara. Most Fraxinus species are dioecious, having male and female flowers on separate plants; if grown as an ornamental and both sexes are present, ashes can cause a considerable litter problem with their seeds. Rowans or mountain ashes have leaves and buds superficially similar to those of true ashes but belong to the unrelated genus Sorbus in the rose family.

TMS-106 these Mature Ash Trees are part of our Trees & Scenic Material range, it is suitable for

TMS-115 these Young Orchard Trees are part of our Trees & Scenic Material range, it is suitable

TMS-114 these Mature Orchard Trees are part of our Trees & Scenic Material range, it is suitable