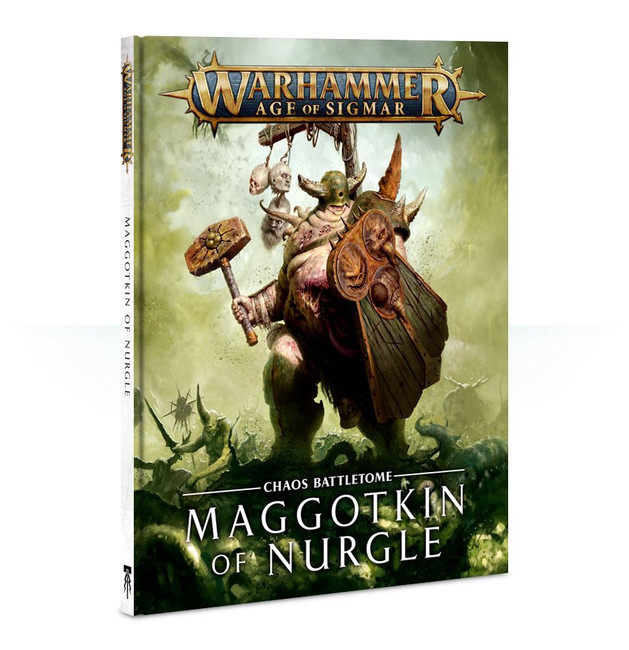 Nurgle is the Chaos God of plagues, whose power waxes strong when disease and despair ravage the Mortal Realms. Though he is a source of fear and revulsion to his enemies, Nurgle is a perversely paternal god, generous with his foul gifts and proud of his worshippers’ every disgusting achievement. His armies, both mortal and daemon, bulge with virulent boons. The twisted and disfigured, the spiteful and forsaken, the hopelessly insane – these Maggotkin spread the joyous filth and bountiful contagions, hoping to turn the whole of the Mortal Realms into a single garden of beautiful putrescence.In the 104-page hardback Battletome: Maggotkin of Nurgle, you’ll find:- Grandfather Nurgle: disturbingly cheerful background information on the most plaguesome of Chaos Gods, delving into his fraught relationship with the other gods, his hideous and bloated physical form and his obsession with the lush, inexhaustible cornucopia of Ghyran;- The Garden of Nurgle: a horribly detailed description of Nurgle’s domain within the Realm of Chaos;- Details of the Daemons of Nurgle, from Plaguebearers to Great Unclean Ones, describing their foul methods of war, along with descriptions of Nurgle’s vast armies of mortal followers;- Armies of the Plague God: the organisation and structure of Nurgle’s armies – the Plague Legions and the Rotbringer Contagiums;- Warbands of the Plague God: descriptions, sigils and colour schemes for 6 specific Nurgle warbands – The Munificent Wanderers, The Befouling Host, The Droning Guard, The Blessed Sons, The Drowned Men and the Filthbringers;- Annals of Entropy: a timeline of significant battles and events in the history of Nurgle’s forces;- Detailed background on the forces available to Nurgle, including mortals and daemons;- A showcase of beautifully-painted Citadel miniatures, with an example Maggotkin army.RulesAll the rules you need in order to get your Maggotkin army ready for the gaming table are here:- 24 Warscrolls, covering mortal and daemon followers alike;- Allegiance Abilities representing the foul gifts that Nurgle’s patronage bestows – including the Cycle of Corruption, a table of filthy boons that will prove advantageous; the Garden of Nurgle, featuring rules for Feculent Gnarlmaws; and rules for summoning daemons using accrued Contagion Points;- Command Traits for Rotbringers, daemon and mortal followers – 6 each;- Artefacts of Power for Rotbringers, daemon and mortal followers – 6 each;- The Lores of Nurgle: spells for daemon and mortal Nurgle wizards, including Foul Regenesis, a spell known by all Nurgle wizards; Lore of Malignance – 3 spells available to any Rotbringer wizard; Lore of Virulence – 3 spells available to any Nurgle daemon Wizard; and Lore of Foulness – 3 spells available to any Nurgle mortal wizard;- Rules for creating a Nurgle warband to use in a Path to Glory campaign, including Followers Rewards Table, Champion Rewards Table and Patronage of Nurgle Tables (featuring lesser, greater and exalted rewards);- A specific Battleplan – Seeds of Corruption – for use with Maggotkin armies;- 8 Warscroll Battalions conferring advantages for fielding certain combinations of models;- Pitched Battle Profiles for all units featured in this Battletome, including unit sizes, points values and battlefield roles.

A morbid set of disease-ridden triplets, held in check and balance by their opposing attitudes and d

Fear the chosen champion of the Chaos Gods! The champions of the Ruinous Powers are powerful indeed,

83-15 Daemons of Nurgle: Beast of Nurgle

If you're looking to reinforce or start a Maggotkin of Nurgle army, this Start Collecting! set is pe

The Disciples of Tzeentch take a great many forms, from Arcanite cultists to hosts of gibbering daem