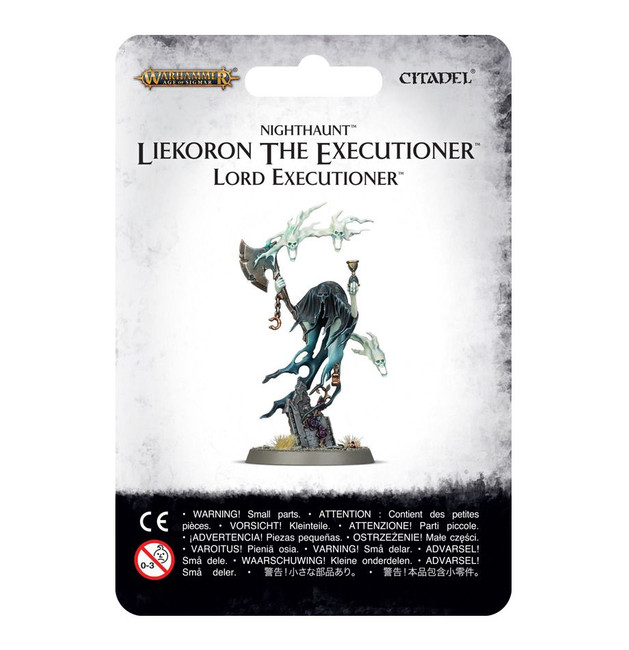 In the living world executioners are tasked with the ending of life, often by axe stroke or noose. The headsmen of the Mortal Realms who knowingly slay the innocent as well as the guilty attract the gaze of Nagash, and upon death are remade into the spectral forms of Lord Executioners. Each bears a massive decapitating axe, with which they are charged to slay heroes, champions, kings and anyone who defies the law of Nagash, all the while harangued by the spirits of the innocent souls the Executioner cut down during life – souls who ironically protect the Executioner from danger, not out of kindness, but due to their inability to escape.

This multi-part plastic kit contains the components necessary to assemble Liekeron the Executioner, a Nighthaunt Lord-Executioner. Looming large over a ruined headstone, Liekeron is depicted as a sinister, hunched spirit, half corporeal and half ethereal, whose skull-like face is picked out beneath a ragged cowl. He holds a well-used decapitating greataxe in his right hand, notched and worn by constant use; his left hand can be modelled clutching a grave-sand filled hourglass, or alternately pointing toward his next victim. Around him whirl 3 furious spirits, the shrieking ghosts of innocents wrongly murdered by the Executioner in life, bound to him forever.

This kit comes as 8 components, and is supplied with a Citadel 32mm Round base.

Where once Dreadscythe Harridans were healers and nurturers, the Harridan Curse – dealt as a terribl

Moving like a ghostly cyclone, the creatures known as Bladegheist Revenants spin in a frenetic fashi

An indomitable new malevolence has stirred an ancient terror. No longer content to hunt civilisation

Driven by an all-consuming hatred of living things, these spectral horrors sweep across the realms i