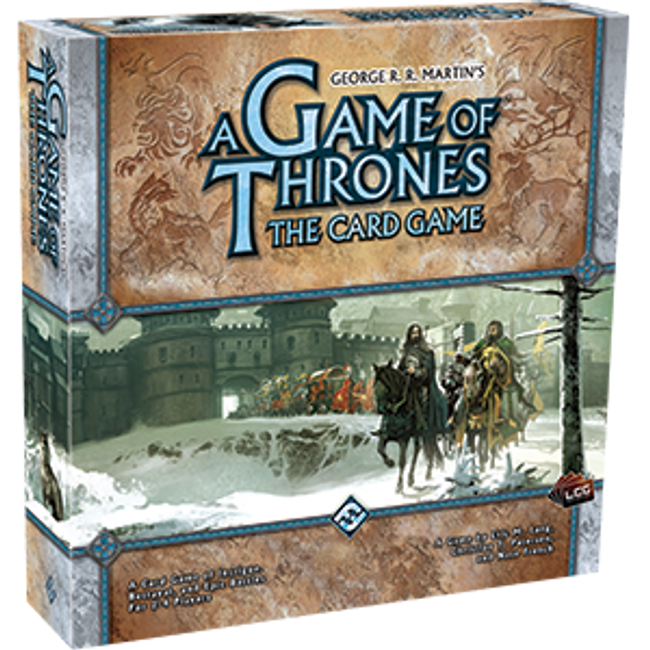 or make 4 interest-free payments of $16.48 NZD fortnightly with

"When you play the game of thrones, you win or you die. There is no middle ground."

Across the Seven Kingdoms, the Great Houses of Westeros struggle to control the Iron Throne. The battle begins here in the A Game of Thrones Core Game.

The beloved heroes, villains, locations, and events of George R.R. Martin's A Song of Ice and Fire saga come to life in this customizable card game. Players take control of the Starks, Baratheons, Lannisters, or Targaryens and attempt to plot, fight, conspire, manipulate, and bribe their way to victory.

The A Game of Thrones card game can be played in a multiplayer "melee" format with 3-4 players, or in a one-on-one "joust" format with 2 players. But whichever format you choose, the game has only just begun! In the world of the Living Card Game™, hundreds of additional cards are available separately, allowing players to customize the four houses included here, or create entirely original decks.

Welcome to A Game of Thrones: The Card Game, where you'll experience George R.R. Martin's Westeros like never before!

Beating down on the sandy wastes of Dorne, the sun-and-spear of House Martell is emblazoned on this

This beautifully weighted and detailed resin House card bears the sign of House Baratheon, and invit

Hear Me Roar! As gold as the coins of Casterly Rock, this beautiful resin House card is detailed wit