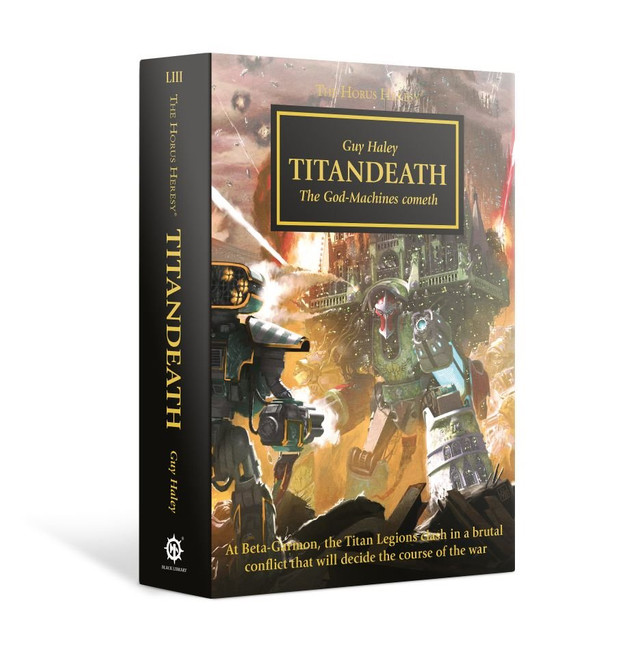 War is unleashed on Beta-Garmon as the armies of the Emperor attempt to hold back the tide of Chaos in the last major clash before Horus reaches Terra itself – and the god-machines of the Adeptus Titanicus are on the front line.

READ IT BECAUSE
The long-awaited and much-teased battle of Beta-Garmon is here, and with armies of Titans clashing in brutal no-quarters combat, Guy Haley has crafted a remarkable tale.

THE STORY
Horus’s armada gathers, and he has defeated all enemies sent against him, even the Emperor’s own executioner. One barrier remains before he can strike for Terra and lay waste to the Emperor’s dream.

The Beta-Garmon system occupies the most direct and only viable route to the Solar System and Terra. To break it, Horus assembles a war host of incredible proportions and Titans in untold numbers. To lose here is to lose the war and Horus has no intention of turning back. But the Imperium understands the importance of Beta-Garmon too. A massive force is arrayed, comprised of near numberless Imperial Army cohorts and a mustering of Titans to challenge even the martial might of the Warmaster.

Titans fight against Titans as the god-machines of Loyalists and Traitors alike go to war. This conflict will be like no other before it, a world-ending battle that will determine the next phase of the war.

Book 19: Know No Fear A Horus Heresy novel Unaware of the wider Heresy and following the Warmaster’

Book 13 of the Primarchs series As the Emperor gathers His sons for an assault on Ullanor, the Lion

A Tyranids omnibus The tyranids are one of the greatest threats to mankind, ravenous aliens who devo