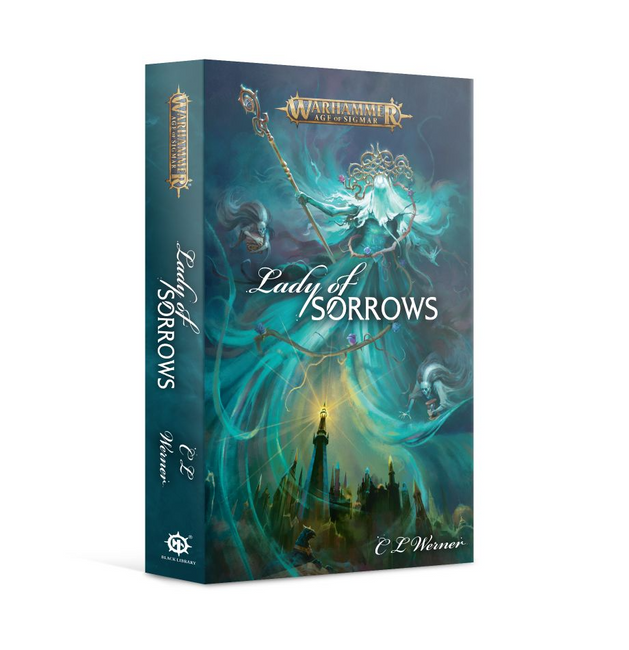 A Warhammer Age of Sigmar novelIn Shyish, twin towns face horror – the spectral hordes of Lady Olynder will soon rise and devour their souls. One hero must stand against them – but can he face the Lady of Sorrows?READ IT BECAUSEGet an insight into life in the Realm of Death, and discover how its inhabitants deal with the constant threat of spectral horror.THE STORYIn the deathly realm of Shyish, the Twinned Towns of Westreach and Eastdale exist on the edge of annihilation. Once in each generation, the hosts of Lady Olynder rise from their tombs to slaughter the towns’ inhabitants, and for centuries the nighthaunts have been turned back, but only after the fiercest of battles. Now, the wizards in the ancient Belvegrod lighthouse have deciphered a prophetic vision that offers a chance to break the curse placed upon the city. The hero Jahangir is fated to lead a desperate mission against the Mortarch of Grief and free his people from this menace once and for all. But is Jahangir equal to the ordeal before him? Can the courage of mortals stand against the undying malice of the Lady of Sorrows?

Warhammer 40,000 Audio Dramas The Raven Guard are Space Marines like no other. The sons of Corax fig

In the wake of the Necroquake, Sigmar’s Stormvaults – arcane repositories locking away great and ter

The Great Necromancer, Nagash, initiates an all-out war to end all life in the Mortal Realms, but in

Enter the heart of one of Sigmar’s arcane prisons with the Shattered Stormvault Ravaged Lands set! R

BL2704 Spear of the Empperor HB

Ghyran burgeons with all forms of life, from the most massive gighemoth to the tiniest parasitic spo