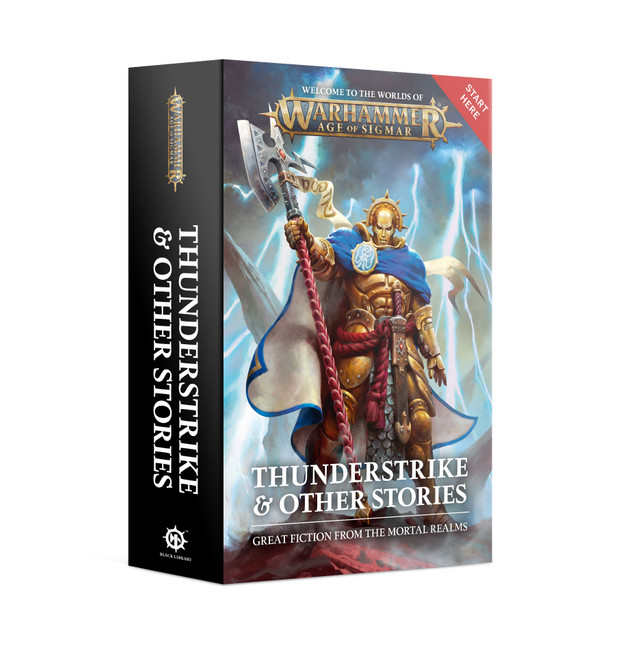 A Warhammer Age of Sigmar AnthologyTake your first steps into the adrenaline-fuelled fiction of the Mortal Realms with a thrilling collection of tales, including an action-packed novella pitting noble Stormcast Eternals against the sinister beings of Ghur.READ IT BECAUSEWhether you're a hardened veteran or dipping your toes into the realms for the first time, these 19 brand new stories introduce you to the various factions as the Age of Sigmar enters the Era of the Beast.DESCRIPTIONWithin this book, you'll find Thunderstrike, a fantastic novella by Richard Strachan...The city of Excelsis is in mourning. Thousands were slain in the great greenskin siege, the streets of a proud civilisation reduced to bloodied pits. The sheer might of Sigmar’s allies may have won the battle, but the war between Order and Destruction is far from over, and out in the Ghurish wildlands a new evil lurks.When Freeguild captain Holger Beck and his regiment are ambushed on patrol, there is no time to fathom the cunning intellect of their foe – all they learn is terror. Broken and beaten, Beck latches on to a retinue of Thunderstrike Stormcasts led by Knight-Relictor Actinus, a formidable warrior under whose intrepid shadow Beck falls. Together, mortal soldier and divine warrior must strike forth into the dark heart of Ghur to destroy their enemy, before it takes advantage of the weakened city. But their trials have only just begun, and when even the indomitable Thunderstrike’s mettle is tested, what chance is there for a human soul to claw at victory?CONTENTS– Thunderstrike by Richard Strachan– Bossgrot by Eric Gregory– The Spears of Autumn by Richard Strachan– The Sea Taketh by David Guymer– Buyer Beware by Gav Thorpe– Shiprats by C L Werner– The Neverspike by Darius Hinks– The Garden of Mortal Delights by Robert Rath– The Hammer of Immanence by Eric Gregory– Blessed Oblivion by Dale Lucas– The Serpent's Bargain by Jamie Crisalli– Ghastlight by Anna Stephens– The Siege of Greenspire by Anna Stephens– The Gossip of Ravens by David Annandale– Last of the Braskovs by C L Werner– Strong Bones by Michael R Fletcher– Mourning in Rainhollow by Dave Gross– Watchers of Battle by Ben Counter– Blood of the Flayer by Richard Strachan

A vision of golden celestial light, a living embodiment of the God-King’s might, the Stormcast Etern

Age of Sigmar: Hammerhal and Other Stories

Warhammer 40000: Crusade and Other Stories

A Warhammer 40,000 anthology Take your first steps into the adrenaline-fuelled fiction of the 41st M