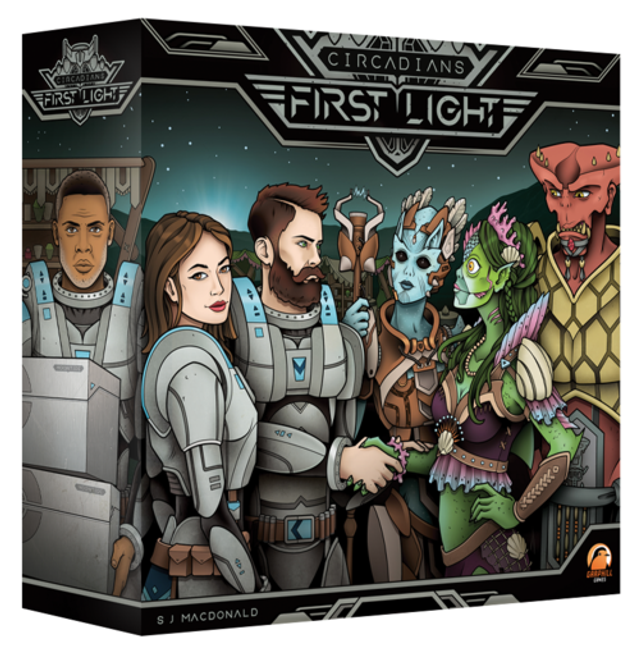 This is the Kickstarter edition of the game, which includes the free Allies Expansion in the box.

We were light years from our home, galaxies away, when we first discovered this ancient celestial body - a planet filled with intriguing, intelligent lifeforms, not too unlike our own. Some built kingdoms below the surface of the green seas, while others controlled the desert-filled plains and cliffs. Among them we found scientists, inventors, farmers, traders and fighters. While our presence has been unsettling for some, we have had very few incidents with the locals. Still, we Circadians, Earth's famed explorers, must do what we can to ensure peace. We must respect this world and its hosts. The heads of Moontide passed down orders from above. We are to open negotiations with the three clans, in hopes of gaining their favor, along with our own security while on the planet. We must also collect organic samples for the depository on Moontide. This is new ground for all of us, but we must be brave and resourceful. The future of the Circadians depends on it.

Little is known of the mysterious First of the Vyrkos. When she and her lupine packs hunt, the enemy

For the Girls: First Expansion

Hey girl hey. Welcome to a brand new party game from the creators of What Do You Meme? Ditch the dud

Rambo: First Blood The year is 1981, and you’re John Rambo

Background Story It is said that every city has a soul. Some are colorful, some are dark. One of the

It's a game of alliances, betrayal, and surprise attacks because on the Risk game battlefield, anyth

Oaxaca Crafts of a Culture

Dominations: Road to Civilization is a 2–4 player game by Olivier Melison and Eric Dubus. In this do