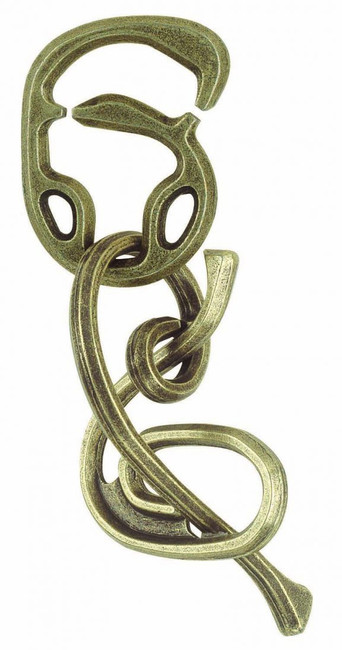 or make 4 interest-free payments of $4.97 NZD fortnightly with

from the designer….’Patented in America in 1975, the somewhat swirled pieces of this puzzle by Eldon Vaughn must be disjoined and then put back together. I once found a smaller version of this puzzle about twenty years ago in America, but considered it impossible to solve at the time. We have made a new version maintaining the difficulty of the original and licensed it for the Cast Puzzle series. This is without a doubt among the most difficult of all puzzles. The key word is ‘twist.’ Don’t use too much forcethe pieces should just slide apart.’

Who ever said puzzles couldn’t be romantic? The Cast Heart represents the bond holding together the

The early 20th century witnessed a kind of puzzle boom, which in 1905 gave birth to an absurdly simp

This type of ring puzzle goes back at least as far as the 15th century, and has been remade with tod

The Radix is a puzzle known for both its monumental looks and somewhat organic styling and movement.

Jan van Haasteren was born in  1936 in Holland. In 1962 he started work doing advertising/illustrati

From the designer. ‘At the end of the 19th century, Britain experienced a huge puzzle craze. I manag