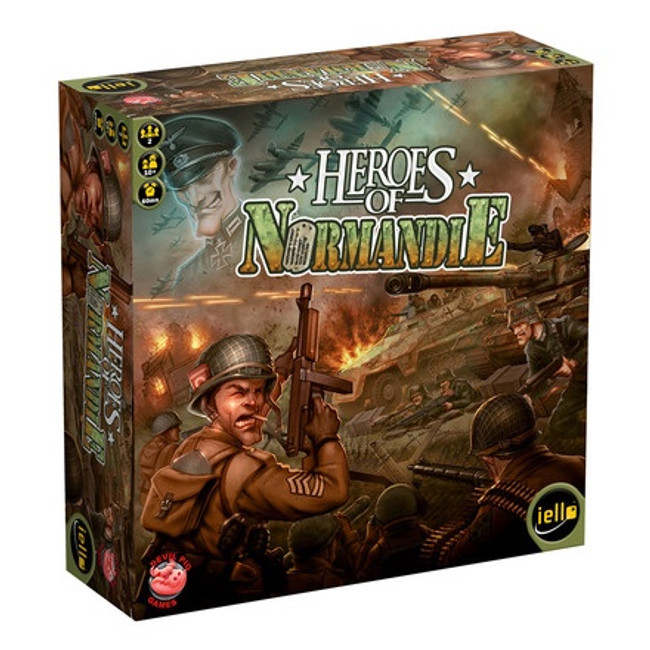 or make 4 interest-free payments of $31.98 NZD fortnightly with

WAR IS MADE OF HEROES...

It is summer, 1944. The sun shines on Normandie hedgerows. Gentle wind, fields of bright flowers, and in the background, the romantic staccato of machine gun fire in the morning. In these typical French countryside landscapes, thousands of men are about to fight. And die. Bravely like heroes, or cowardly like wussies. But only heroes really matters. Those you see in Hollywood classic war movies. This is where Heroes of Normandie draws its inspiration; here is what the game has to offer: explosive and fast-paced battles; the pleasure of destroying your enemies with streams of hot lead from your MG42, or crushing nazi bastards under tons of mortar shells... Basically, blood and guts and glory!

Heroes of Normandie is a new, fast-paced WW2 strategy wargame inspired by Hollywood war movies. This is a tactical scale board-game for 2 players, each commanding their own armies. The Germans on one side, the Americans on the other. Players deploy their units, secretly plan their attacks and try to outwit their enemies by blocking their strategies and surprising them. One thing’s for sure: there's no turning back!

Heroes Incorporated introduces players to the next generation of crime fighters. 2 to 4 players each

Heroes of Normandie US Army Box

Increase your US army with one well organized box! For more info, support, and WW2 conversations, pl

BL2687 Heroes of the Empire PB

A Warhammer Chronicles omnibus The Empire of Sigmar is under constant threat, and only its great arm

Exit the Game: The Sinister Mansion

Product Description You are invited to be a guest at a palatial mansion, but upon arrival, you find

Product Description Legend of the Five Rings: The Card Game is a player-influenced Living Card Game®

Gloomhaven: Jaws of the Lion

Product Description   Theme: Talisman is an adventure board game set in a high fantasy medieval worl