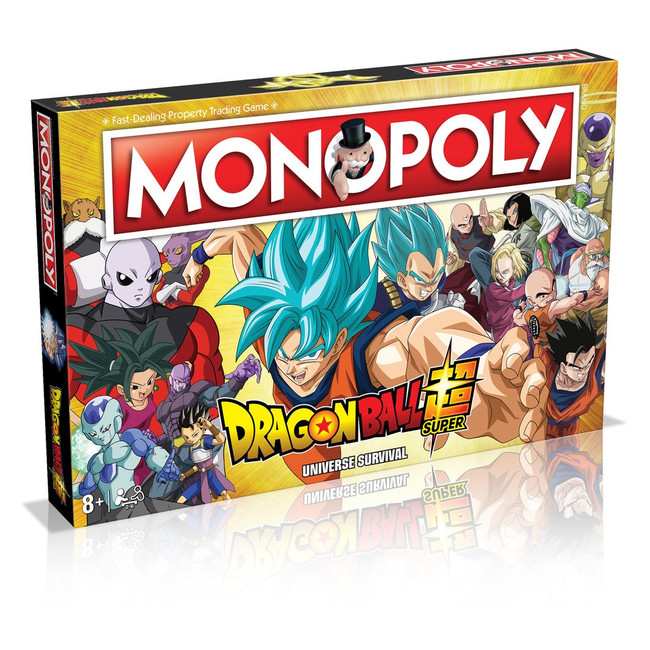 or make 4 interest-free payments of $17.48 NZD fortnightly with

THE TOURNAMENT OF POWER BEGINS, WITH SURVIVAL ON THE LINEWith Majin Buu vanquished and Earth returned to peace, Goku and his friends lived out normal lives. However, a deadly threat emerged in the form of Beerus , the powerful God of Destruction, who was searching for a mythical warrior seen in a prophecy, known as the formidable Super Saiyan God. A fierce battle ensued and concluded with Beerus revealing that there are a total of 12 universes. Zen Oh, one of two kings of the 12 universes, declared that 12 universes was “too many” and so it came to pass that the Tournament of Power would be held. The Great Priest set out the rules that representatives of the eight universes with the lowest mortal levels would fight, and the losing universes would be destroyed! Can Goku and his friends survive?In this special Dragon Ball Super edition of MONOPOLY, you have the chance to own characters from the anime, including Goku , Piccolo, Gohan , Vegeta , Jiren , the Great Priest, Zen Oh, universe gods and many more. Use the Gods and Warriors cards to your advantage and buy, sell and trade your way to success. Will you be the strongest opponent yet?

Having defeated Boo, Goku is starting to get bored with his life on Earth. His wife, Chi-chi, wants

The greatest warriors from across all of the universes are gathered at the Tournament of Power. Kale

The Tournament of Power is over and Goku and Vegeta have embarked on a new adventure…in space! The G

Moro’s goons have arrived on Earth, but the planet’s protectors aren’t about to go down without a fi

Fantasy Flight Games is proud to present the Legend of the Five Rings Roleplaying Game GM Kit!   The

Mansions of Madness: (2nd Ed) Beyond the Threshold

Product Description The horrors of Arkham continue to haunt you in Beyond the Threshold, the first e

Take your Catan game over the horizon and discover a life of island adventure with Catan: Explorers