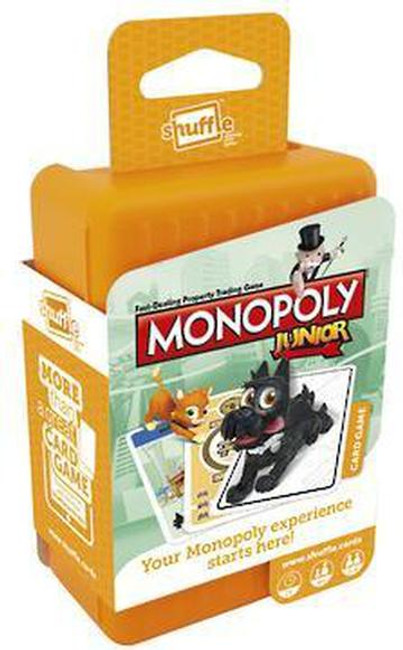 or make 4 interest-free payments of $3.98 NZD fortnightly with

Monopoly Junior Shuffle Card Game is a very entertaining, simple to learn and surprisingly addictive card game based on the classic Monopoly board game brand. It is a much simplified version of Monopoly

This version is clever but with very simple gameplay dynamics. Players take it in turns to pick up a card from any one of four piles of cards. They can either draw property cards to collect, properties already owned by other players which they have to pay rent for and money to be used to pay rents. The first player to get three property pairs (i.e. two different properties from the same colour, times three pairs) is the winner. It’s as simple as that!

Monopoly Junior Shuffle Card Game plays quickly – typically 5-10 minutes in our testing. Younger children will probably need a little help getting started, but once they have got it, should be able to play among themselves without parental involvement.

This type of game has an often under estimated developmental/educational value for younger kids. They have to count money, use visual recognition skills and from a social development perspective they learn turn taking .

The Monopoly Brand Deal Card Game is all the fun of the Monopoly game in a quick-playing card game.

Whooopah! It’s time to join the legendary friends, from one of TV’s best-loved sitcoms in Friends Mo

Product Description This is another great addition to the Shuffle Card Game Family, You can use the

Get ready for an exciting quick-playing Monopoly card game! The Monopoly Bid game is a game of chanc