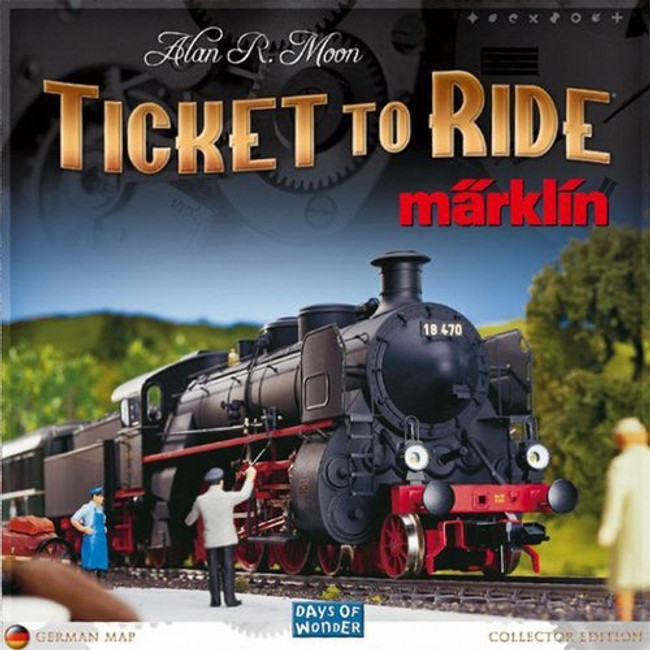 or make 4 interest-free payments of $23.23 NZD fortnightly with

Ticket to Ride - Marklin Edition is the third installment in Days of Wonder's best-selling boardgame series that has won over 15 international game awards, including the prestigious Spiel des Jahres.

The boardmap for the Marklin Edition is based on a map of Germany and introduces Passengers and Merchandise to the Ticket to Ride gameplay.
Passengers are used to pick up merchandise worth different numbers of points along the routes that they claim. Varying stacks of merchandise tokens with different point values are placed next to the different cities on the map. Players can place one of their 3 Passenger tokens on any city along a route that they claim. On his game turn, the player can choose to then move one of his passengers from the city it currently occupies along any or all of his continuous routes, picking up Merchandise Tokens from each city he moves through. Of course he'll always take the highest remaining tokens. The point total of the tokens is then added to his score.
Other game play changes are the vertical orientation of the German map, and instead of a bonus for longest route, the 10 point bonus card goes to the player who completes the most Destination Tickets.
While boardgamers may not be familiar with the Marklin name, train hobbyists consider it the premier name in the model train world. This German company has been around for over 140 years and is the world's leader in the miniature train hobby. Each train card in this edition will feature a different image (118 in all) of a Marklin model train car or locomotive. To learn more about Marklin we invite you to visit their website at www.marklin.com.
×

Welcome to New York City in the 1960s! In this brand-new version of Ticket to Ride, players race one

Ticket to Ride: Heart of Africa

Ticket to Ride Nordic Countries takes you on a Nordic adventure through Denmark, Finland, Norway and

A New Train Adventure Begins!  The Ticket to Ride Card Game delivers all of the excitement, fun and

Embark on an incredible adventure in Alan R. Moon's Team Asia map as you and a partner compete again