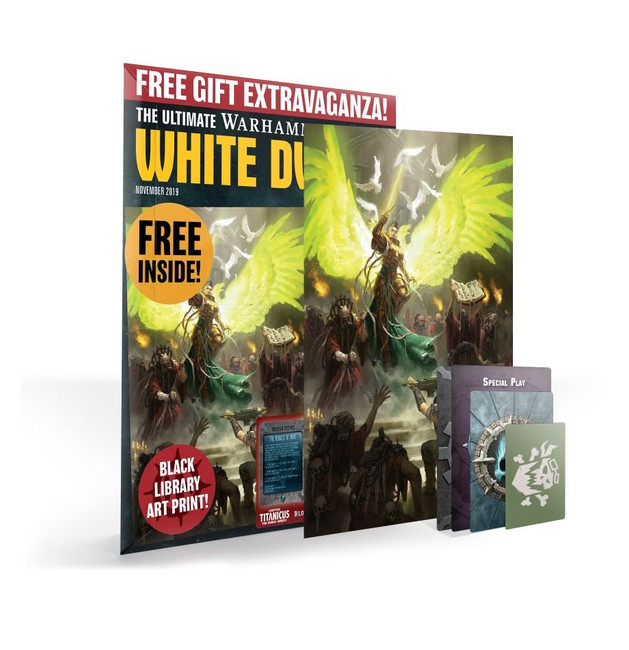 or make 4 interest-free payments of $4.50 NZD fortnightly with

Here’s what you can look forward to in November’s issue:

Inside The Studio
What have the Design Studio’s hobbyists been up to this month?

WARHAMMER 40,000
Echoes From The Warp
Robin hands his regular column over to James Gallagher, who discusses Warhammer 40,000: Kill Team.

Index Imperialis: Inquisition
Background and rules for using the forces of the Inquisition in your games of Warhammer 40,000. Heretics will be purged!

Agents of the Inquisition
Whet your converting appetite with a gallery of kitbashed Inquisitors and their retinues.

Dawn of the Era Indomitus
Let the Torchbearers light the way in this guide to the early period of the Indomitus Crusade.

WARHAMMER AGE OF SIGMAR
Rules of Engagement
Jervis is joined by Sam Pearson to talk about the development of Warcry.

On the Mawpath
The Warhammer Age of Sigmar team present new background for the ogors, along with new rules for taking them on campaigns.

Hunger Pains
In this short story, Ogor Tyrant Klobb Bloodbelly and the Cracked Rib Warglutt have been feasting on rocks for a while now. However, a tasty meal has just been brought to their table…

A Tale of Four Warlords – The Stormvault Warlords
Our four warlords are steadily gearing up for war, having played their first games. Their armies are all looking pretty sizeable, too!

WARHAMMER UNDERWORLDS
Battle Report – The Battle in Beastgrave
David Sanders and John Bracken – the guys who developed Warhammer Underworld: Beastgrave – take each other on in a Battle Report.

The Apex Predator
Become the Ur-Predator in this new game variant for Warhammer Underworlds: Beastgrave!

Path to Victory
David Sanders provides some in-depth tactics for the warbands in Warhammer Underworlds: Beastgrave.

WARHAMMER 40,000: KILL TEAM
Unexpected Encounter
As if fighting the enemy wasn't hard enough in Warhammer 40,000: Kill Team, now an Ambull has turned up!

THE HORUS HERESY
Army Feature – Sons of Fulgrim
Andy Hoare showcases his colossal Emperor’s Children collection and explains why they're his favourite Legion.

WARHAMMER QUEST: BLACKSTONE FORTRESS
The Kiss of Death
What would happen if a Harlequin Solitaire entered the Blackstone Fortress? These new solo-play rules allow you to find out for yourself!

MIDDLE-EARTH™ STRATEGY BATTLE GAME
The Hero of Esgaroth
Jay Clare explains why he’s such a fan of Bard the Bowman, as well as how to get the most out of this noble hero in your games.

BLACK LIBRARY
The One-man Crusade
Dan Abnett joins us to chat about his latest project – the new edition of The Sabbat Worlds Crusade book.

Clanrats mass into huge clawpacks, their vast numbers bolstering their courage and allowing them to