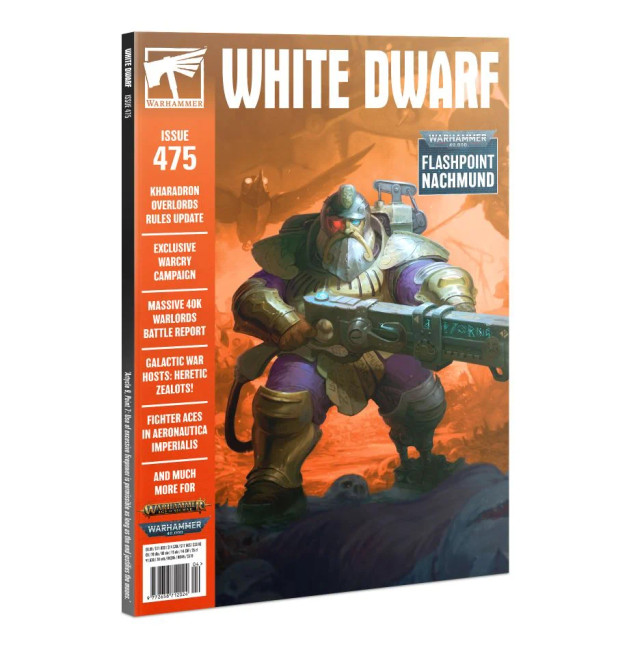 Letters, painting advice and beautifully painted miniatures. This issue: Necrons, vampires, and a question about souls.

Heirs of Reason author and studio background writer Callum Davis joins us to talk about Greyshields.

Here’s what we've been up to around the studio lately.

The Acts of The Wardens

With the Nachmund Gauntlet under attack, the Wardens of the Gauntlet are assembled to defend it.

New Crusade rules for puritanical warriors. But which god will you follow into battle? Includes two new Requisitions plus a D6 Weapon Enhancement and D6 Battle Scar tables for the the Righteous.

Major Hesper must decide the fate of the Khymer 64th, but will Commissar Qalo agree with his decision?

Place your faith in the Dark Gods, and revel in the majesty of their servants in this article as it provides hints and tips on heretical architecture, renegade vehicles, as well as a huge host of heretical hobby inspiration.

Echoes From The Warp

Duncan Waaagh! joins us to talk about meaningful battlefield choices, like trying to shoot with Orks…

Servants of The Dark Master

New rules, which are legal for use in Matched Play, for fielding Chaos Knights alongside the Disciples of Be’lakor. Eep!

It’s the grand finale of A Tale of Four Warlords! Jonathan and Lydia take on Drew and Joel in a truly colossal, 300 Power-a-side showdown for the ages!

Welcome, traveller, to the domain of the Everchosen. Great glory or an eternity of damnation awaits you.

Peruse your articles and amend your addendums, because we've got new background and updated rules for the masters of the skies. This month's Tome Celestial updates the Kharadron Overlords in matched play, including a revised warscroll for the Arkanaut Admiral, as well as a Grand Strategy, three Battle Tactics and two core battalions for use in matched play. It also contains updates for open play and Path to Glory narrative play.

A new campaign for the Kharadron Overlords sees them hunting for the legendary Grudgeserver, including a new battleplan – Total Destruction.

Sam Pearson shares his wisdom on creating and running his first campaign: the War in Carcass Donse. He even shares all his campaign rules! Includes detail on gaining glory points as well as exploring the lost ruins of the all but extinct Drogrukh.

What’s that, little mortal? You wish to be a mighty Daemon Prince? Then perhaps you should undertake this simple quest… This article contains battleplans for the four new convergences in your quest to ascend.

Legends of the Skies

Goggles on, moustache waxed, scarf to the wind – you're ready to be a fighter ace! A brand new suite of rules for use in Aeronautica Imperialis games let your squadrons and the pilots gain experience over the course of a campaign, learning new skills if they survive long enough, and upgrading their aircraft. This article provides 16 new Ace Abilities, each with the corresponding Accomplishment required to be achieved in order to 'learn' the skill. Aircraft Customisations allow pilots to modify their aircraft as their renown grows.

It still only counts as one! Yes, one cracking article packed with tactics for the unlikely companions Legolas and Gimli.

The ongoing series focusing upon the Tome Keepers continues as the war on Anakletos continues, and Chaplain Sephax comes to the realisation that he may have failed in his duty.

Max Faleij talks about Golden Demon and offers advice for those thinking of entering this prestigious competition, including insight on what Golden Demon judges actually look for in winning entries.