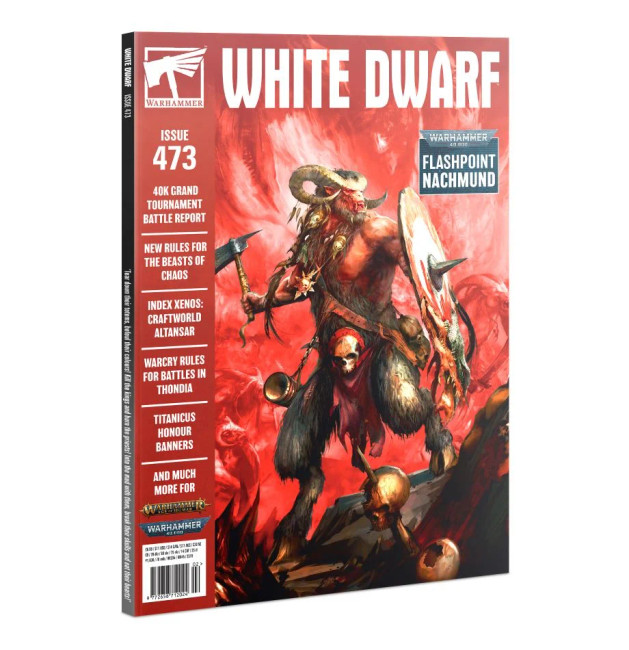 White Dwarf is Games Workshop's premium Warhammer magazine, packed with amazing content each month such as new rules and background, short stories, regular columns, special guests, and more.Here’s what you can look forward to in February's issue:Contact!Letters, painting advice and beautifully painted miniatures. This month: creating Space Marine Chapters, painting verdigris on metal, and a big dragon!Inside the StudioWe talk about some of the models we've painted and the games we've played over the last month.WARHAMMER 40,000Battle Report: Death and ZealVeterans of the gaming scene take their first strides into the Chapter Approved Grand Tournament War Zone Nachmund Mission Pack with a Battle Report featuring YouTube’s Lawrence Baker (Tabletop Tactics) and Stephen Box (Vanguard Tactics), in a tactically tense matched play game that pits the Adepta Sororitas against the Drukhari.Index Xenos: Craftworld AltansarThe sinister Aeldari from the lost craftworld of Altansar come under the microscope. Includes a host of new background, including a focus on the Phoenix Lord Maugan Ra, and rules for fielding an Aeldari force from Craftworld Altansar, including a Craftworld Attribute, 4 Stratagems, 3 Warlord Traits, and 2 Relics.Paint Splatter: Craftworld AltansarA four-page painting guide for the magenta-clad Aeldari, including useful tips on painting Altansar's magenta and bone armour, eye lenses, Spirit Stones, and freehand icons.Readers’ Gallery: Loyalists and RenegadesA stunning gallery of Imperial and Renegade Knights built, painted, and photographed by you, our readers!WARHAMMER 40,000 FLASHPOINT: NACHMUNDThe Enemy WithinNot all heretics are axe-wielding lunatics covered in ritual markings to the Chaos Gods. Some are far more secretive, as this article explains.The Martyr’s RewardFollowing on from last issue’s story, the Khymer 64th Infantry find themselves as the rearguard in an Imperial retreat.The Faithful HostsA host of new rules for embarking on a Crusade of Faith with your Warhammer 40,000 army build on the Crusade rules included in last month's White Dwarf (although this suite of rules also works entirely in isolation too!) and includes rules for Righteous Inspiration, 8 Crusade Stratagems, 4 Requisitions, as well as an all-new Psychic Discipline the Righteous Disciple with 6 new psychic powers.WARHAMMER AGE OF SIGMARWARHAMMER AGE OF SIGMAR FLASHPOINT CLASH:Realmscapes: The Bright CityJoin us on an adventure to Hammerhal Aqsha, mightiest of Sigmar’s strongholds in the Realm of Fire and one half of the Twin-tailed City.The Tome Celestial: The Beasts of ChaosExciting new background and updated rules for the Beasts of Chaos. Unleash your inner beast, ravage the Mortal Realms and devour their inhabitants!This update for Battletome: Beasts of Chaos contains new content for open, narrative and matched play, including a new Battle Trait, five new Beasts of Chaos Monstrous Rampages, a warscroll update for the Herdstone, one Grand Strategy, three Battle Tactics, and Path to Glory content.To Hunt the DawnSharpen your horns, show your dedication to the Dark Gods, and summon the true children of Chaos as you prepare to defend the herdstones against erstwhile Dawnbringer Crusades in this new Beasts of Chaos mini campaign.Warhammer Age of Sigmar: A Tale of Four WarlordsMartyn, Miyuki, Rich and Calum have come to the end of their year-long challenge. Read about their experiences and bear witness to four incredible and mighty armies, all of which are well over 3000 points!WARCRYOut on the Range (of Thondia)New rules for fighting Warcry battles in the Realm of Beasts – great treasures, tasty feasts, and wanton savagery await. Harvest that mouldscuttle and tend those snappers with these new nine Victory Conditions, twelve Twists, six Command Traits, and twelve Lesser Artefacts.WARHAMMER UNDERWORLDSGlory PointsThere’s a new way to play Warhammer Underworlds – Untamed Relics! Do you have what it takes to catch a killer sword?Provides rules for playing this new game mode for both 1v1 and multiplayer (3-4 player) games.ADEPTUS TITANICUSHonour BannersEver wondered what those symbols mean on a Titan’s banner? This article explains all and shows you how to make your own, including photocopiable Battle Logs, Titan Logs and Titan Banners to help you create your own Titans' historical banners which they can take to the field of battle against your enemies.BLACK LIBRARYThe High OratorCallum Davis chats to us about Tome Keepers. Get a behind the scenes look at the new serial he’s been working on!Heirs of Reason: Duel of WordsPart two of a serialised story about the Tome Keepers. In this instalment, Librarian Lykandos takes on the minds of the Ecclesiarchy!CARD INSERTThe physical edition of this issue includes a cardboard insert with an updated warscroll card for the Beasts of Chaos Herdstone terrain piece and four Aeldari Craftworld Altansar Stratagem cards.Each physical copy of Issue 472 comes with 24 Secondary Objective Cards, including 23 from the new Chapter Approved: War Zone Nachmund: Grand Tournament Mission Pack and 1 ‘How to Use’ card.