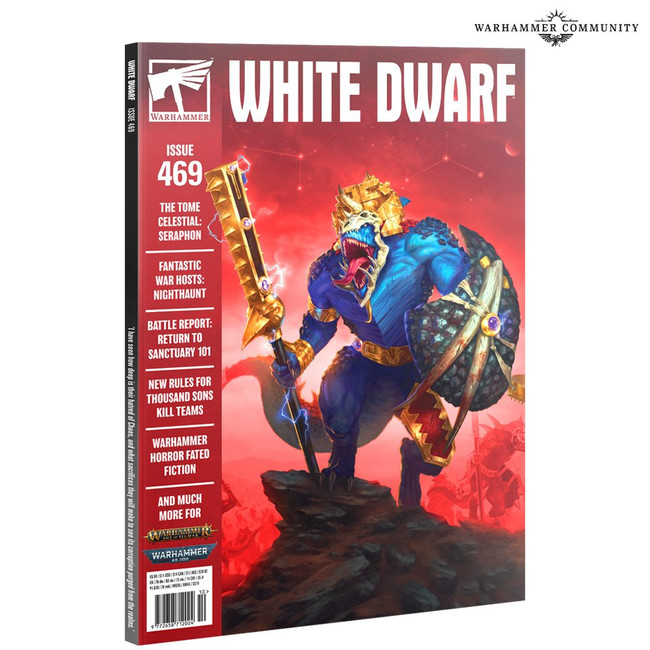 White Dwarf is Games Workshop's premium Warhammer magazine, packed with amazing content each month such as new rules and background, short stories, regular columns, special guests, and more.Here’s what you can look forward to in October's issue:Contact!Letters, painting advice, and beautifully painted miniatures. Plus, a mural, a query about vampires, and a fancy Land Raider.Worlds of WarhammerButchers, bakers, and candlestick makers - some of the lesser-known professions of the Mortal Realms are discussed in this month’s column.Inside the StudioWe talk about some of the models we’ve painted and the games we’ve played over the last month.WARHAMMER 40,000Battle Report: Return to Sanctuary 101Twenty-three years ago (from White Dwarf 218 in February 1998), the Necrons overwhelmed the Adepta Sororitas at Sanctuary 101. History, it seems, is repeating itself…Spear of LightningIn this short story, a trio of Librarians from the Atlantian Spears infiltrate an Ork kruiser. They're not prepared for what awaits them on the bridge.WARHAMMER AGE OF SIGMARFantastic War Hosts: The NighthauntSteel your souls, mortals - here’s a 10-page modelling and painting guide for the ever-vengeful Nighthaunt! Get a load of these spectacular conversions of Treelords, Mega-Gargants, and Stormcast Eternals.Realmscapes: The Realm of HeavensWar has yet to reach High Azyr, but its effects are still keenly felt.WARHAMMER AGE OF SIGMAR FLASHPOINT CLASH:The Tome Celestial: SeraphonAll who stand in the path of universal order shall suffer the wrath of the stars. So say the slann in this Tome Celestial, which contains an update for Battletome: Seraphon, including 4 Allegiance Abilities, 1 Core Battalion, 2 Grand Strategies, 2 Battle Tactics for matched play, Seraphon Twists and Ruses for open play, and Path to Glory content for Seraphon in narrative play.The Incandescent SphereThe Incandescent Sphere has begun to turn, but it's badly damaged. The Seraphon must find the missing parts to unlock the device’s secrets.This article provides readers with a Campaign Arc for 1 Player, allowing them to take charge of their Seraphon army as they seek out and hunt down 5 missing relic fragments.Paint Splatter: SeraphonEnjoy two stellar painting guides for the celestial Seraphon. You'll find guides for painting skink warriors to both Battle Ready and Parade Ready standards using both the Classic and Contrast methods.KILL TEAMOperation BriefingSpecial Operative Elliot Hamer talks about Veteran Guardsmen, sneaky Ork Kommandos, and how they operate on the battlefield.Warpcoven Kill TeamsAn introduction to the sinister Sorcerers who would see the galaxy burn - but not before they learn its secrets.Operatives of ChangeA colossal 16-page treasure trove of arcane knowledge (and rules) enabling you to build your very own Thousand Sons Warpcoven Kill Team. All is dust!THE HORUS HERESYArmour Through the AgesTake an in-depth look at power armour designs throughout the Great Crusade and the Horus Heresy, covering everything from Mk I through Mk VI.WARHAMMER UNDERWORLDSGlory PointsDoes your personality dictate how you like to play? Do you revel in the slaughter? Or are you cold and calculating? This article includes a 'preference map' that asks readers questions and, depending on their answers, leads them to their ideal warband for games of Warhammer Underworlds.THE MIDDLE-EARTH™ STRATEGY BATTLE GAMELord of the Nazgûl™The Witch-king of Angmar descends from storm-wracked skies in this issue’s tactica article.’EAVY METALBrush TipsThe ’Eavy Metal team talk about painting Bladeguard Veterans for the First Founding Loyalist Chapters (and the Black Templars).BLACK LIBRARYFated Fiction: Shattered WorldA Warhammer Horror tale from the twisted mind of Jake Ozga. Each issue contains one of four different endings, so you might want to borrow your friends' copies to find out what you're missing.ARMIES ON PARADEArmies on Parade: The Iron KnightsArmies and Battlefields Painter Andy Barlow shows off his Armies on Parade entry for this year’s competition.CARD INSERTEach physical copy of Issue 469 includes the following:- A double-sided cardboard insert provides two different atmospheric pieces of art to stand in as backdrops. Use them to improve your miniature photography!

Small enough to fit into all sorts of tight nooks and crannies, the S Base brush is perfect for gett