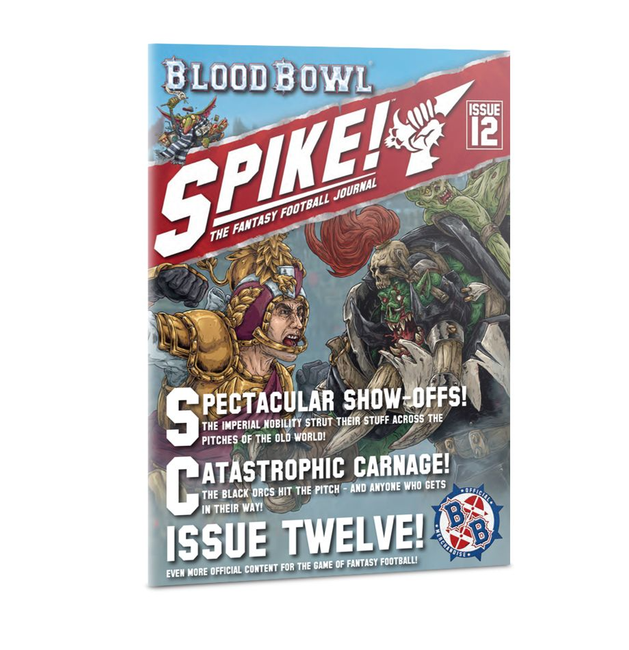 The exalted (and fabulously wealthy) Lord Baltazär Krüssenfalt Schweiger III guest edits this doubly exciting issue of Spike! Journal. It covers both Imperial Nobility and Black Orc teams to celebrate their stunning showing in the XL Blood Bowl final.This 36-page magazine pulls double duty, covering the history, rules, and rosters of both the Imperial Nobility and Black Orc teams. Packed with all the fantastic fun and essential commentary you've come to expect from Spike! Journal, this magazine is the perfect companion for the savvy coach.It includes:- Highborn Heraldry: Exploring the background and history of Imperial Nobility teams, the various player positions, Star Players, and a team roster.- Famous Imperial Nobility Teams: The Bögenhafen Barons are the most well-known, but you'll also find background on teams like the Ostermark Dukes, the Averland Earls, and more.- Star Player Spotlight – Griff Oberwald: Perhaps the greatest Human Blitzer to grace the pitch and certainly one of the most recognisable, and least humble.- The Empire’s Finest: Pro tips on coaching Imperial Nobility teams, developing your players, and getting the most from your team.- Dirt From the Dugout: Mindy Piewhistle chases down some rather unsavoury rumours about one Lord Driego Koloroff.- Smarter Than Your Average Orc: Dig into the origins of Black Orc teams, plus information about the three positions, Star Players, and a team roster.- Famous Black Orc Teams: You've heard of the Thunder Valley Greenskins, but don't forget about the rest, including the likes of the Orcland Raiders and Grimfang Gougers.- Star Player Spotlight – Varag Ghoul-Chewer: Thrill to the sordid tale of the Mean Green Machine’s rise to superstardom.- Bash ‘Em and Smash ‘Em: Tips on taking your Black Orcs to the top. Lead your fresh green rookies to seasoned green old-timers, with helpful diagrams and example rosters.- Chat with the Rat: Hackspit Quillchewer chats-talks with Gurgnie Shwarzenorc, who wants to share an exciting opportunity to help you achieve the muscle mass you long for.- Coffin Corner: The ever-amusing column covering the most gruesome and entertaining Blood Bowl deaths, on and off the pitch.

Join Butty Baconfingers as he guest-edits issue 5 of the Spike! Journal. He'll show you the ropes of