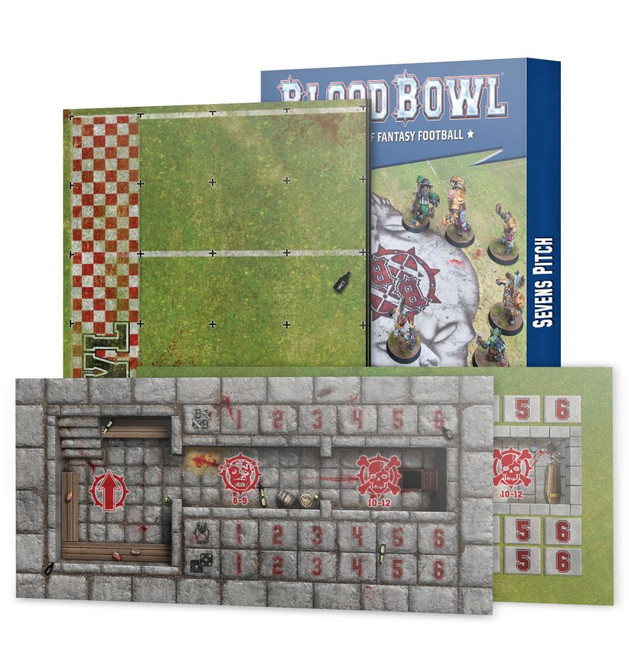 Amateur games of Blood Bowl are often played on a smaller pitch, with fewer players. A quick game of Sevens is a well-loved way to settle a grudge, pass the time, or take out business and romantic rivals with a convenient 'accident'. Even professional teams occasionally play a game of Sevens to stay sharp or as a charity event.

As Blood Bowl Sevens is played with fewer players on each team, it makes sense that the pitch is reduced in size too. As such, some pitches are smaller than standard Blood Bowl regulations dictate, designed specifically for use when playing games of Sevens.

This simplified version of the game is ideal for younger players, busy coaches, or anyone looking to get into the game with a shallower learning curve.

This reversible Blood Bowl pitch features a standard turf field on one side and astrogranite tiles on the reverse. Though the size is reduced, all the standard markings are present and accounted for.

You'll also find a pair of matching double-sided dugouts to complete the theme. Redesigned for games of Sevens, each dugout features a shorter Score, Turn, and Re-roll tracker, plus Reserves, Knocked-out, and Casualty boxes. You'll need a copy of both Blood Bowl – The Official Rules and the Death Zone supplement to use this pitch.

There are few grand stadia in Norsca, for most of the Blood Bowl pitches in that icy land are loosel