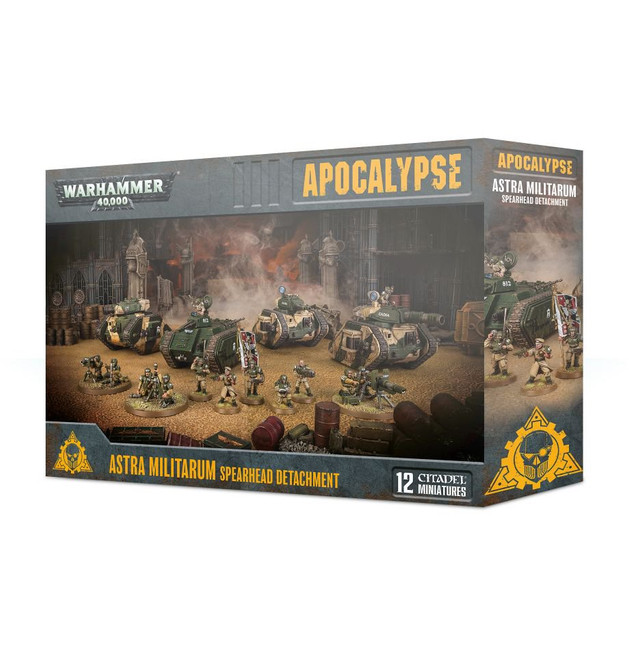 The Astra Militarum is the largest coherent fighting force in the galaxy, comprising billions of soldiers who fight boldly for the survival of Mankind. Squads of footslogging troops lay down hails of fire, their commanding officers bellowing orders and praises to the Emperor, while armoured columns rumble forward to obliterate the enemies of the Imperium. Comprising everything you'll need and more to form a Spearhead Detachment in Warhammer 40,000: Apocalypse (or to kick-start your Astra Militarum collection with a bang), the Astra Militarum Spearhead Detachment set includes your three mandatory Heavy Support units (and a fourth for good measure!), as well as an Elites unit and an HQ choice to lead it. As a Character, the Company Commander can also serve as the Detachment’s Warlord, enabling you to generate an additional Command Asset each turn. An Astra Militarum Spearhead Detachment includes the following multipart plastic kits: - 1 x Cadian Command Squad (5 miniatures, each supplied with a Citadel 25mm Round Base) - 2 x Leman Russ Battle Tanks (2 miniatures that can each be assembled as a Leman Russ with battle cannon, Leman Russ Exterminator, Leman Russ Vanquisher, or Leman Russ Eradicator) - 1 x Leman Russ Demolisher (1 miniature that can be assembled as a Leman Russ Demolisher, Leman Russ Executioner, or Leman Russ Punisher) - 1 x Cadian Heavy Weapons Squad (3 Heavy Weapons Teams, each supplied with a Citadel 60mm Round Base) - 1 x Chimera - 1 x Cadian Transfer Sheet - 4 x Imperial Guard Transfer Sheets Warhammer 40,000 rules for these units can all be found in Codex: Astra Militarum, while a pdf with their Apocalypse datasheets can be downloaded for free from Warhammer40000.com/Apocalypse/Datasheets

A single super-heavy tank is a dominant presence in an Astra Militarum battle line. As it plo

The Hydra Flak Tank is equipped to blow aerial foes out of the sky. Armed with twin-lined Hydra auto

Led by the irrepressible Colonel-Commissar Ibram Gaunt, the Tanith First and Only are a reconnaissan

The Ordo Tempestus commands the finest human soldiers in the galaxy. Its disciplined ranks boast not

Made up of innumerable billions of soldiers from a million different worlds, the Astra Militarum is,

Though much of an infantry regiment is made up of rank-and-file Guardsmen, those soldiers with an af