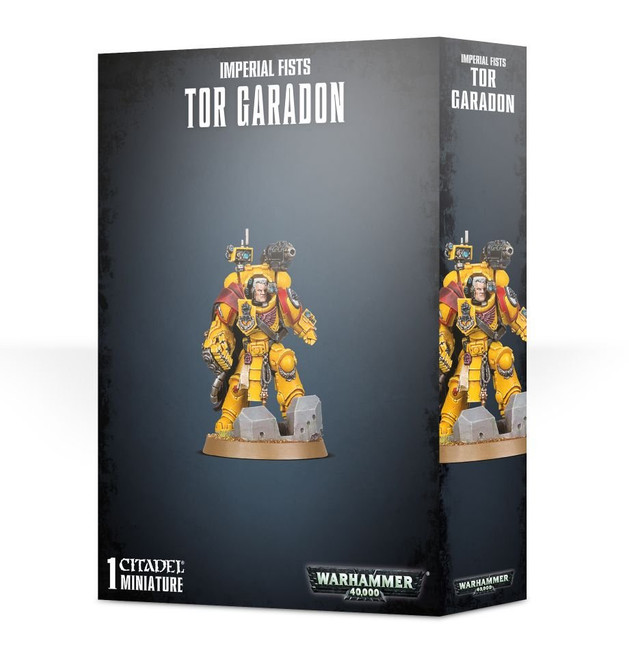 Tor Garadon is the Imperial Fists' longest serving Battle Company Captain, an unstoppable warrior in whom the lessons of the Primarch have been distilled to their most punishing form. Tested on a thousand worlds, he is a master of the battlefield, and an unyielding bulwark against those who would oppose Mankind.

Armed with a backpack-mounted grav-gun and the artificer power fist known as the Hand of Defiance, Tor Garadon is among the Imperial Fists' most formidable warriors. Even as explosions tear the ground around him, the 3rd Company Captain stoically guides the fire of the warriors around him with curt commands and targeting information gleaned from his signum array.

This 21-piece plastic set makes one Captain Tor Garadon and is supplied with one Citadel 40mm Round Base.

The Imperial Fists are the most stalwart of all Adeptus Astartes, and their stoicism in battle is le

Unleash the mighty Sons of Dorn with these handy reference cards! Each set is great for easily refer

Masters of warfare and strategy, the Ultramarines embody pure heroism. Conquerors and protectors in

Steeped in the arts of ambush and hidden assault, Kayvaan Shrike is the Raven Guard’s foremost warri

Every Space Wolves warrior dreams of a place in the Wolf Guard. To be a member of this select brothe