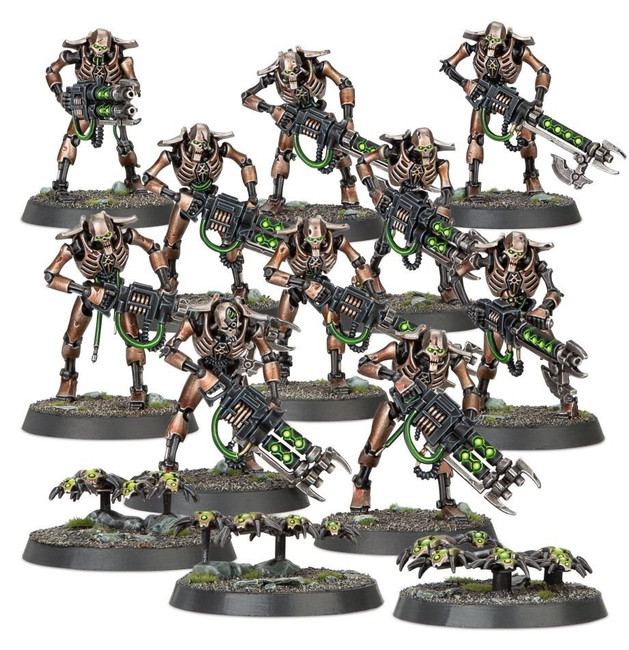 Necron Warriors form the majority of a tomb world's nigh-inexhaustible armies. They are a corps of fleshless mechanoids, ranged in their millions against the vital races of the galaxy. Ancient limbs are corroded with age, yet the strength of their metal sinews has not faded, nor has the hard-wired loyalty to their Overlords.

Canoptek Scarab Swarms are found throughout tomb worlds and Necron spacecraft, where automated routines compel them to break down damaged matter of all kinds with their entropic mandibles. They feed on organic and non-organic matter alike, converting it into energy which is re-routed into repair protocols.

Whether you're looking to cut down the enemy at range with gauss flayers or march inexorably forward to shred them at close range with gauss reapers, all the while assailing them with swarms of Canoptek Scarabs, this is the perfect kit to build your Necron army around.

This kit builds ten Necron Warriors – each with a choice of two heads and the option of either a gauss flayer or gauss reaper – as well as three Scarab Swarms. Push-fit construction means you won't need any glue to build it. The kit is supplied in 70 plastic components and comes with ten Citadel 32mm Round Bases and three Citadel 40mm Hex Hole Round Bases.

Nothing is so emblematic of Necron implacability as the Monolith. Like all Necron constructs, it is

Psychomancers study the science of fear. They are expert manipulators, conjuring phantasms and tempo

The Voidscarred are hardened veterans of a life of piracy. These Corsairs have travelled the stars f

Sisters Novitiate are young recruits to the Adepta Sororitas. Trained by the Drill Abbots of the Sch

In battle, Harlequin Troupes move fast and hit hard, relying on speed and skill to annihilate the en

As the shock troops of the Necron army, a phalanx of Immortals will strive for victory using every t

Release Date 30th July 2022   With outlawed knowledge of the deeper mysteries of the machine, Warpsm

For ten thousand years, the Chaos Space Marines have waged near-constant war on the galaxy that cast