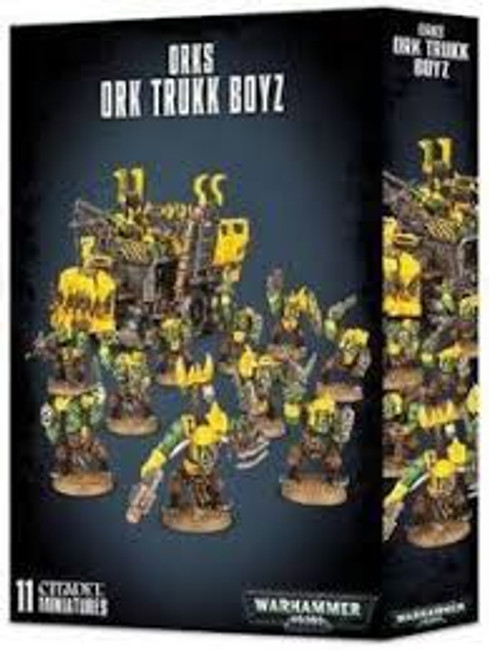 rks are a warlike, crude, and highly aggressive green-skinned Xenos race. Orks are the dominant subspecies of the Orkoids, which includes the smaller Gretchin and Snotlings. Although their society is entirely primitive and brutal, the Orkoid race is also the most successful species in the whole Galaxy, outnumbering possibly every other race. However, due to their aggressive and warlike nature, this massive race is split into hundreds of tiny empires, warring as much between themselves as against other races.

Boyz are the rank and file of an Ork army. Orks are tough, determined fighters who fall upon the ene

Trukks are designed to transport mobs of choppa-wielding Boyz into combat as quickly as possible. Ea

Bipedal wrecking balls that charge ahead of the Ork lines, Smasha Squigs live in a state of near per

Many Orks dedicate themselves to the pursuit of one obsession over all others, which for the Beast S

Release Date Due 7th November 2020   Ghazghkull Mag Uruk Thraka is a mighty prophet of the Waaagh!,

Behold the Flash Gitz! The richest and most obnoxious of all the Orks. These wanton mercenaries trav

The Adeptus Mechanicus are the faithful disciples of the Machine God, wielding arcane technology to

The Orks are the most relentlessly warlike alien race in the galaxy. They are also one of the most

Flayed Ones keen shrill hunting cries as they fall upon the foe, talons flashing. Infected with the