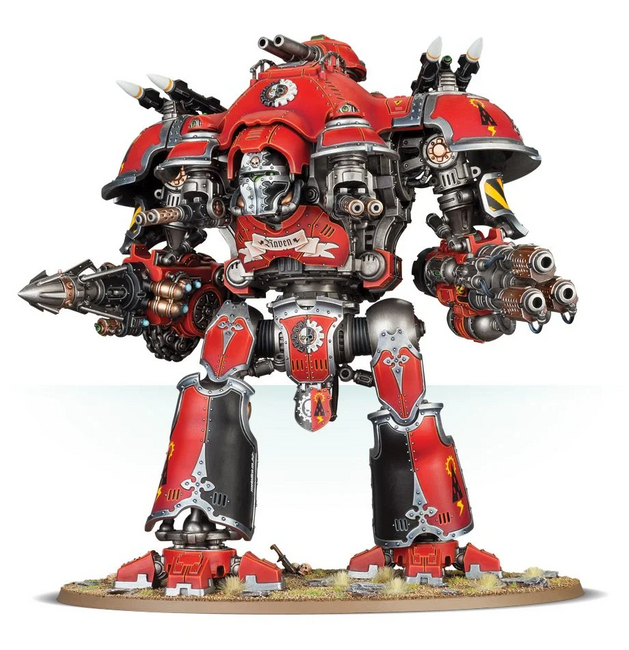 or make 4 interest-free payments of $86.75 NZD fortnightly with

Dominus-class Knights are among the largest available to any Knight house. These walking fortresses march relentlessly into the fight, armed with weapons capable of levelling entire armies, gunfire scattering uselessly off their ion shields. The Knight Valiant defeats its enemies through overwhelming firepower at close range. Its conflagration cannon unleashes a searing, inescapable firestorm, easily annihilating incoming hordes and smashing through opposing battle lines, while its thundercoil harpoon can destroy tanks and monsters with impunity.This multipart plastic kit builds one Knight Valiant, a titanic line-breaking Lords of War choice for your Imperial Knights army – or a wandering Freeblade for other Imperium forces. This super-heavy walker is armed with an incinerating conflagration cannon, a tank-puncturing thundercoil harpoon, and an array of carapace-mounted meltaguns, shieldbreaker cannons, and missiles. The Knight Valiant makes a fantastic painting project and centrepiece, and offers a range of poses, face plates, and armour pieces, allowing you to create a truly unique engine of war. This kit can also be assembled as a Knight Castellan, as well as a Knight Tyrant for Chaos Knights.

This kit comprises 172 plastic components, and is supplied with a Citadel 170mm Oval Base. Also included is a transfer sheet, featuring heraldry for Imperial Knights. This miniature is unpainted and requires assembly – we recommend using Citadel Plastic Glue and Citadel paints.

Small and agile compared to their lumbering kin, Armiger-class Knights are still war machines of inc

The Imperial Knights march to war with earth-shaking footfalls, towering over mortal soldiers and le