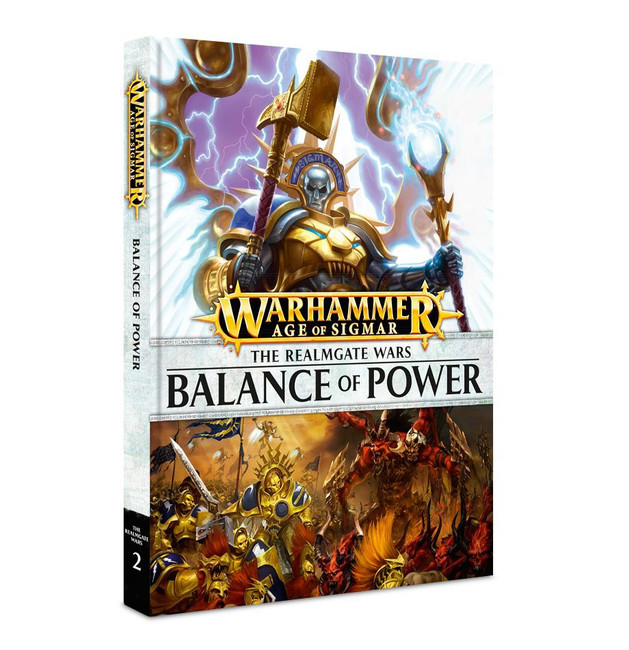 or make 4 interest-free payments of $37.50 NZD fortnightly with

The Realm of Life is falling apart. Athelwyrd has been destroyed. Alarielle and the sylvaneth flee, as Chaos begins to exert its festering grip; Realmgates are corrupted and even the Stormcast Eternals may not be enough to stop the putrefaction. In the Realm of Fire, the Skaven make their move against the Fyreslayers. In the Realm of Metal, Vandus Hammerhand leads a Stormhost in an attempt to stop the Lord of Change Kiathanus gaining indescribable power. And if these threats were not enough, the Exalted Grand Marshal of the Apocalypse himself makes his presence felt…

The Realmgate Wars: Balance of Power is Book 2 in the exciting Realmgate Wars saga! This book contains, alongside dramatic narrative advancing the story of Sigmar’s Stormcast Eternals’ attempt to restore Order to the mortal realms:

Four new Time of War sections - rules that anyone with any army can use for fighting in fantastical locations that wildly change the way Warhammer Age of Sigmar games are played;
Ten new Battleplans - any Warhammer Age of Sigmar army can be used to play out these scenarios, including desperate defence, a surprise assault and a special four-player Battleplan!
Forty-one Warscrolls and nine Warscroll Battalions covering the Stormcast Eternals, Nurgle Rotbringers, Sylvaneth, Fyreslayers, Deathlords, Skaven and Slaves to Darkness;
An awe-inspiring showcase of Citadel miniatures, with step-by-step painting guides for Skaven, Seraphon, Skeleton Warriors, Slaves to Darkness, Chaos Warriors, Stormcast Eternals and Fyreslayers;
Incredible artwork showing off the power and awe of the events sundering the Mortal Realms!

The Realmgate Wars: Balance of Power is a full-colour 304 page hardback.

It began with unsettling dreams, and unnatural lights in the sky. Tempers frayed, families fractured

A fantastic, full-color 120-page painting guide for every one of the forty-seven models included in

Home to myriad slumbering magicks and restless, unquiet spirits, the Ophidian Archway is a virtually