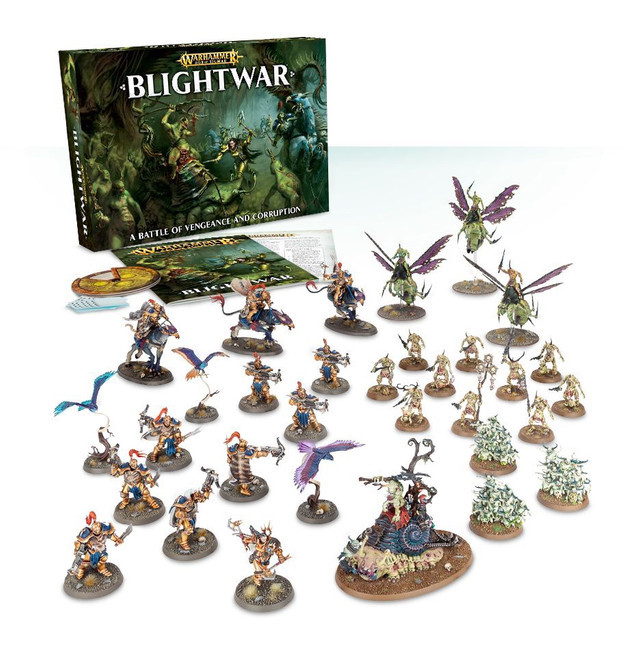 or make 4 interest-free payments of $78.50 NZD fortnightly with

War rages across the Mortal Realms. The focal points of the first great battles were those magical portals known as Realmgates, doorways through reality with immense strategic importance. The wars over these were brutal and bloody, and while Sigmar’s glorious Stormcast Eternals can lay claim to victory, it was not quite the all-conquering victory for which they might have hoped. It was not long before the Dark Gods marshalled their counterattack – and none were so febrile and repulsive as those of Grandfather Nurgle…

Warhammer Age of Sigmar: Blightwar is a great-value boxed set, featuring 32 plastic Citadel miniatures split across the armies of Nurgle and the Stormcast Eternals. It focuses on the Blightwar – Nurgle’s dastardly plan to befoul the realm of Ghyran using his Grand Cultivator Horticulous Slimux, and the heroic attempts to stop him by Neave Blacktalon, deadly huntress and swift-footed assassin of the Stormcast Eternals. Contained in the box:

- A brief history of the Realmgate Wars and the events leading up to Blightwar;
- An overview of Nurgle, the Chaos God of Pestilence who seeks to take over Ghyran with his own foul garden;
- An overview of the Stormcast Eternals, living weapons who blaze with celestial light as they scour Chaos from the Realms;
- Cycles of War – the Chaos invasion that became known as the War of Life, and the devastating impact of Nurgle’s malign influence;
- The Season of Sowing – details of Nurgle’s numerous unpleasant attempts to dominate, waging war on countless fronts to weaken the resolve of the Stormcast Eternals; no matter how decisively they are held back the chaos continues, and the sowings go on…
- An introduction to Horticulous Slimux and his dreadful mount Mulch – humorless genius and leader of the rotten assault on Ghyran;
- An introduction to Neave Blacktalon, instrument of Sigmar’s will who will accept neither defeat nor death in her zealous pursuit and destruction of Nurgle’s hordes.

- 3 Battleplans, which you can use to re-create key battles between the Stormcasts and the forces of Nurgle;
- Allegiance Abilities – battle traits that characterise the 2 opposing armies, to be used in games;
- 2 Warscroll Battalions, designed to make use of the entire selection of included miniatures from both armies;
- Warscrolls for every miniature, featuring their rules for use in Warhammer Age of Sigmar;
- Pitched Battle profiles for each unit and Warscroll Battalion, including points values and unit sizes;
- A separate rulesheet containing the core rules for Warhammer Age of Sigmar;
- A Wheel of Corruption, helping to keep track of Nurgle’s Cycles of War abilities in-game.

- 1 x Horticulous Slimux atop his fearsome mount, Mulch. He carries various horticultural tools (using the unpleasant lopping shears as a potent weapon) and prized specimens, and is dangling a Nurgling in front of Mulch to encourage this grumpy beast to move ever forward;
- 1 set of 10 Plaguebearers of Nurgle – these are each armed with plagueswords, and feature the option to assemble a piper and icon bearer;
- 1 set of 3 Nurglings – gruesome yet cheery stacks of creatures, with 27 possible combinations in total;
- 1 set of 3 Plague Drones of Nurgle – these come armed with death’s heads and yet more plagueswords, and feature the option to assemble an icon bearer and bell toller;
- 1 x Neave Blacktalon – a Stormcast Eternals Knight-Zephyros armed with a pair of whirlwind axes and a boltstorm pistol stowed on her belt. She has a choice of heads; one with a helmet, and one bare;
- 1 set of 3 Vanguard-Raptors, who can be armed with your choice of longstrike crossbows or hurricane crossbows;
- 1 set of 3 Aetherwings, large birds of prey aligned with the Vanguard-Raptors who attack on their masters’ command;
- 1 set of 3 Vanguard Palladors – these are armed with your choice of either boltstorm pistol or shock handaxes and strike javelins, and ride furious Gryph-chargers;
- 1 set of 5 Vanguard-Hunters armed with boltstorm pistol and either a shock handaxe or storm sabre, with options for a Hunter-Prime.

Containing everything you need to get your miniatures clipped from their sprues, cleaned up and pain

For millennia armies have battled for control of the region known as the Flamescar Plateau, seeking

Destroy all before you (figuratively, of course) with this dice set for Warhammer Age of Sigmar. It

A vision of golden celestial light, a living embodiment of the God-King’s might, the Stormcast Etern

For millennia armies have battled for control of the region known as the Flamescar Plateau, seeking

When Nagash resolved to conquer Ghur, Kainan's Reapers were amongst the first forces he despatched,

The Slann Starmasters of the Seraphon foresaw danger in Beastgrave. Unchallenged, the corrupting pre