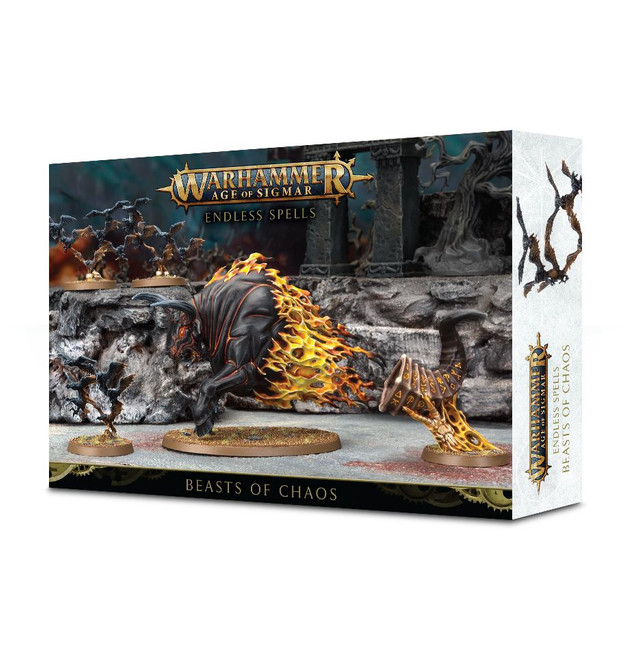 or make 4 interest-free payments of $18.25 NZD fortnightly with

The cataclysmic necroquake of Shyish has flooded the Mortal Realms with the powers of the aether. Incantations summon forth new conjurations of unprecedented power and frightful sentience, but beware – such endless spells can be treacherous, as likely to turn upon their caster as they are to devastate the enemy. From unleashing disembodied gnashing jaws to devour your foes, to raising prismatic barricades to protect your flanks, doing battle in the time of the Arcanum Optimar is unlike anything that has come before.

This multi-part plastic kit contains the components necessary to assemble 3 Endless Spells usable by Beasts of Chaos wizards in games of Warhammer Age of Sigmar. When used with the Malign Sorcery rules, these can be incredibly powerful tools in your magical arsenal. Included:

- A Wildfire Taurus: a gargantuan flaming bull which stampedes through enemies without breaking stride, setting flesh ablaze and crushing those not consumed by the conflagration;
- A Doomblast Dirgehorn: animal bones drawn out from the earth and fused into the shape of a giant horn which blasts a dolorous dirge capable of stripping the minds of those within earshot;
- A Ravening Direflock: this is a murder of 6 spectral crows, circling the battlefield and harrying those who try to flee the carnage with unending, dispiriting caws.

This kit comes as 25 components supplied on brown-coloured plastic, and includes 4 Citadel 40mm Round bases and a Citadel 70mm Oval base. Warscrolls are found in Battletome: Beasts of Chaos.

Harness the twisted sorceries of the skaven with this set of endless spells! Each offers unique and

Bad omens are all around you! Whether it's black cats walking in front of you, walking under ladders

Item Details   It's dark times for the Teenage Mutant Ninja Turtles! The Shredder has seized control

The mortal worshippers of Chaos gather together in warbands mighty enough to conquer entire nations.

Relentless and unstoppable, existing only to destroy, these Daemons are the deadly foot soldiers of