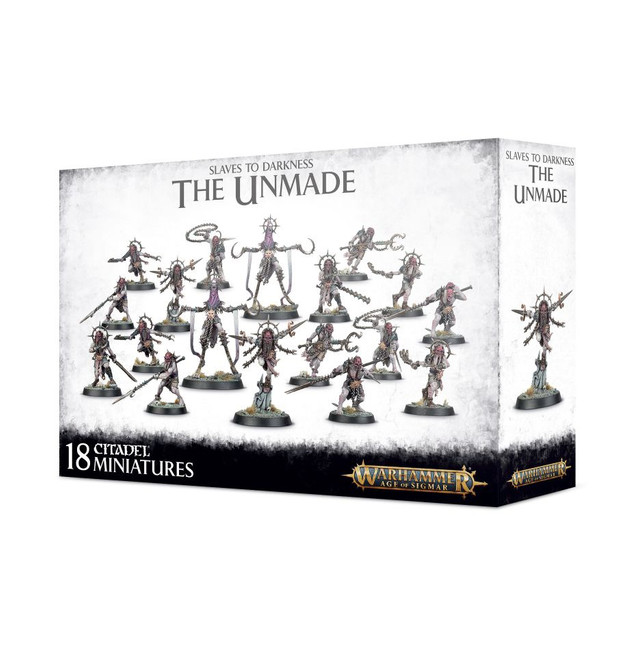 The island of Tzlid, drifting ever closer to the Shyish Nadir, is home to the cannibal tribes of the Unmade. The self-mutilation performed by these pain worshippers is horrifying to behold, and their leaders are visions from the darkest of nightmares.

The Unmade don't just look scary – they're a cracking choice for the battlefields of Warhammer Age of Sigmar, too! These self-mutilating maniacs won’t just carve your enemies up in close combat, but can rob them of their ability to run away, too. This lets you lock down key foes while the rest of your Slaves to Darkness run roughshod on your foe’s squishiest units! They'll also dish out some nasty penalties to Bravery for anyone nearby. Alternatively, you can use this set to bolster your roster for Warcry if you already own your Fighter Cards and Abilities Card for the Unmade.

This set complains 18 plastic miniatures, consisting of:
- 2x Blissful Ones
- 2x Joyous Ones
- 8x Awakened Ones
- 6x Ascended Ones

The Cypher Lords seek not only to defeat their foes, but to drive them to insanity, for they believe

Unleash the malevolent magics of the Slaves to Darkness with these extra-evil endless spells! Castab

Skilled blacksmiths, the Iron Golems believe themselves chosen to provide arms and armour to Archaon

Devout worshippers of Chaos, the Slaves to Darkness bring war to the tortured lands of the Mortal Re

Brutish creatures from a lost age, the Fomoroid Crushers now exist only to tear down and destroy. In

The Cypher Lords seek not only to defeat their foes, but to drive them to insanity, for they believe

The Mortek Guard are soul-constructs created to dominate the battlefield. Armed with life-draining n

Filled with the fervent belief that the living have no place in Shyish, Zandtos uses his armies as e

The Ossiarch Bonereapers come forth in macabre splendour, for they are Nagash's will given form. All

The Ossiarch tithemasters often demand their grisly bounty be left at designated nexuses of power. T