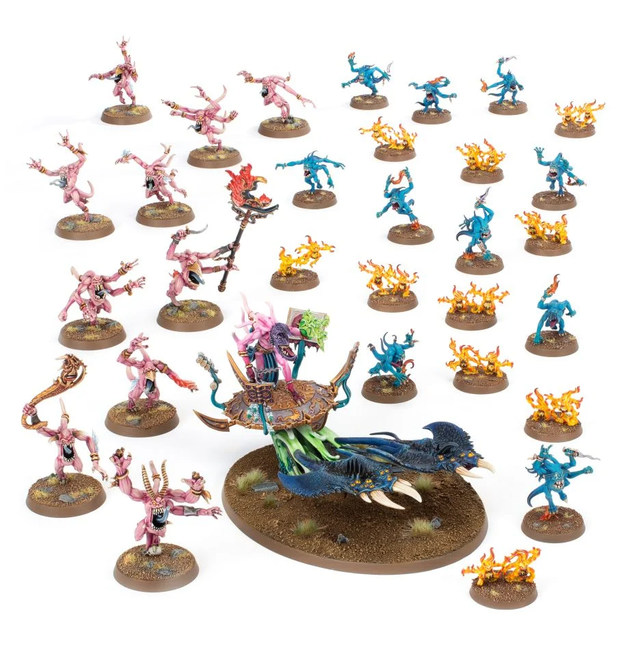 or make 4 interest-free payments of $37.25 NZD fortnightly with

Atra'zan the Immolator seeks to engulf the Mortal Realms in an arcane firestorm. To see this done, he's assembled a troupe of daemonic pyromaniacs who surge into battle like a living inferno, delighting in the agonised screams of burning mortals and the stench of charred flesh.Drown the battlefield in a shifting tide of multicoloured madness with this horde of gibbering daemons and their diabolical master. Combine the models in the set with the rules found in Broken Realms: Be'lakor, and you'll be able to field the Atra'zan's Blazing Cavalcade warscroll battalion for a Disciples of Tzeentch army, transforming them into Atra'zan the Immolator and his cohort of ever-changing horrors. This box also saves you money compared to getting the models separately, and as with most Chaos Daemons, they can be used in games of Warhammer 40,000 as well as Warhammer Age of Sigmar.Included in this set:1x Fateskimmer, Herald of Tzeentch on Burning Chariot10x Blue Horrors10x Pink Horrors10x Brimstone HorrorsThis kit is comprised of 144 plastic components, and is supplied with 24x Citadel 25mm Round Bases, 11x Citadel 32mm Round Bases, 1x Citadel 74mm Oval Base, and 1x Citadel 120mm Oval Base.

Among the uncounted warherds of Ghyran, Ghorraghan Khai is well-known for the chaotic energies that

While they may look like the myriad other daemons that cavort in Slaanesh's embrace, the Exquisite P

Among the uncounted warherds of Ghyran, Ghorraghan Khai is well-known for the chaotic energies that

Amongst the deluded cannibals of the Ymetrican Flesh-eaters, there are none more devoted to Nagash t

The battlefield glows bright as the Lumineth go to war. These elegant aelves hail from Hysh, the Rea

As the shock troops of the Necron army, a phalanx of Immortals will strive for victory using every t

Hidden among the ruins of the Mortal Realms thrive the Flesh-eater Courts. Trapped within a horrific

83-79 Slaves to Darkness Harbingers of Ruin