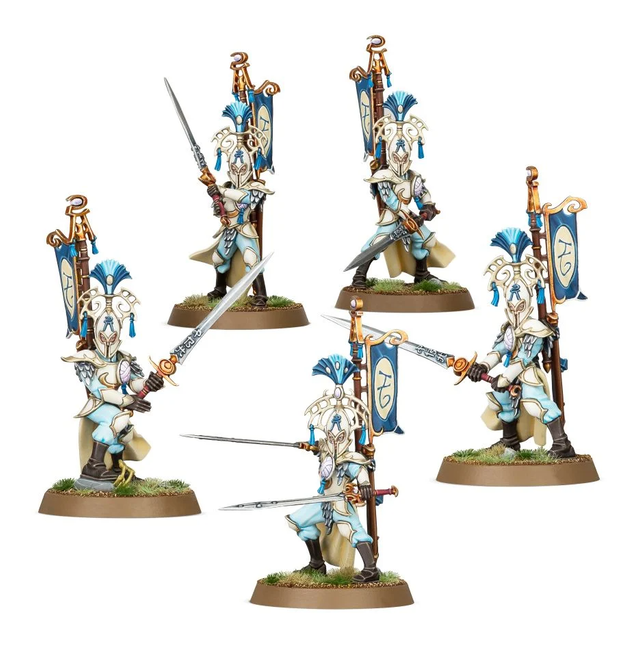 Soldiers and scholars both, the Vanari Bladelords are a walking contradiction of Lumineth philosophies. Although they hail from the Tyrionic nations and dedicate themselves to mastery of combat in all its forms, they make their home in Teclian cities and devote just as much time to studying the theory of battle. In return for the knowledge gained from the most learned of Scinari aelves, Bladelords act as their guardians on the fields of war, cutting a whirling swath through any who would threaten the mystics and sages of their people.Armed with sunmetal greatswords, the preternaturally skilled Bladelords present a swirling storm of blades to anyone foolish enough to engage these masters of the martial arts. You'll be able to choose between two styles of combat to better suit their opponents, from single heavy hits that strike with perfect accuracy to a blistering whirlwind of steel that punishes hordes of closely packed infantry. The banners on their backs, given to them by the Scinari and woven from magical thread, shield them from enemy spells to better protect their charges.

The kit is comprised of 48 plastic components, with which you can assemble 5 Vanari Bladelords, with an option for assembling one as a male or female Seneschal armed with a Sunmetal Greatblade or Sunmetal Dual Blades. These models are supplied with 5x Citadel 32mm Round Bases.

The Auralan Wardens fight in close formation, using long pikes that they set to receive the charge o

Bearing majestic standards into battle at the head of a Vanari host, Bannerblades are honoured champ

Made from supple, yet extremely strong dreamwood, the Vanari Starshard Ballistas are the premier art