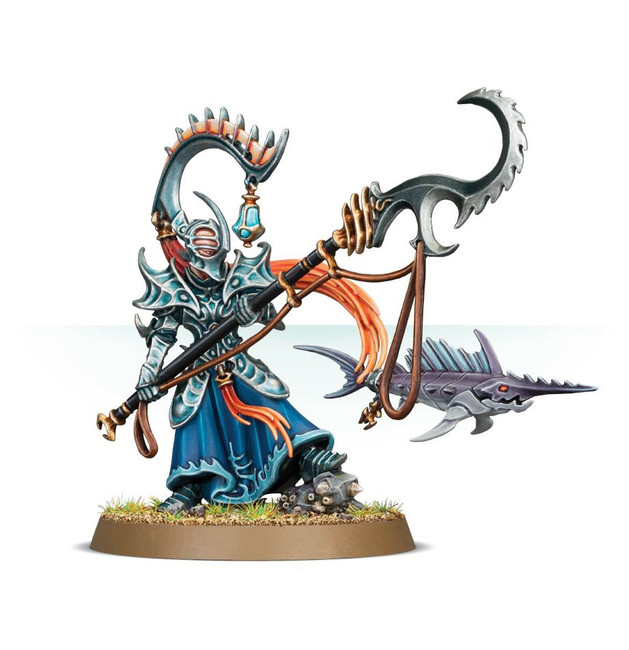 The Soulrenders are unusual amongst the Isharann, for they are trained alongside the Akhelians, and are well accustomed to acting at the forefront of battle. Upon each Soulrender’s helm dangles a lurelight, its strange glow attracting and absorbing souls. Armed with a hooked polearm known as a talúnhook, Soulrenders fight alongside the Namarti, replenishing their subordinates’ ranks even as they reap spirit-stuff. A rope-catch attached to the talúnhook is ideal for snaring foes that attempt to flee, and each Soulrender employs a Rakerdart, a bond-beast that glides at its master’s feet, ready to stab prey with its sharp bill to ensure none can escape.

This multi-part plastic kit contains the components necessary to assemble an Isharann Soulrender. Far more heavily armoured than the Namarti he fights alongside, this model is clad in thick metal plate, with enormous shoulder pads in the shape of nets giving the model a particularly aggressive silhouette. The lower half is covered by a large robe featuring embroidered waves, from under which his heavy boots peek – his left foot is standing on a barnacle-encrusted rock, which decorates the base. His helmet is a standout feature – partially closed, a large metal structure looms out and over the top of his head, ending with the lurelight he uses to attract the soulstuff that fuels his kin. His talúnhook is massive – longer than he is tall – and ends in a wicked serrated blade, curving into an evil-looking hook, with its rope-catch dangling beneath. The Rakerdart that accompanies him is clearly a creature accustomed to combat, with plates running the length of its body and a large spike providing offensive weaponry.

This kit comes as 7 components, and is supplied with a Citadel 32mm Round base.

With their cyfar compasses and dowserchimes, the Soulscryers can map the dark corners of a being’s s

No troops exemplify the Idoneth Deepkin way of life more than the Akhelian Guard. Mounted atop Fangm

Thrallmasters are cunning and sea-scarred Akhelians who lead the Namarti hosts into battle. Master d

All Bonesplitterz carry a spark of the violent god Gorkamorka's wild rage in their cracked minds. In

The Auralan Wardens fight in close formation, using long pikes that they set to receive the charge o

Merciless, fast and graceful, Tree-Revenants have a number of duties in a sylvaneth Household. Patro

In life, those who were to become Grimghast Reapers were careful and meticulous killers. In death, t

The air sings with glorious life magic as the children of Alarielle surge into battle. The reborn go