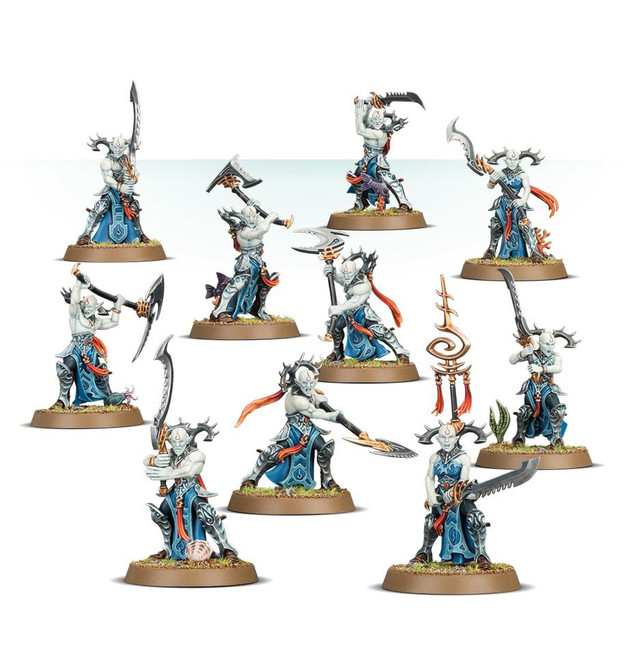 Like all aelves, Namarti Thralls possess a physical grace that to other races appears supernatural. The Thralls march to war for the Idoneth as the main body of their infantry, and it is their task to engage and hold the enemy in place. In battle the Namarti fight with an array of weapons known as lanmari – two-handed swords, great scythe-axes or pole-axes of intricate design. The weight and reach of such weapons are useful when driving off the enormous sea creatures that bedevil the Idoneth enclaves, while their broad blades are suited to scything through the teeming swarms of predatory fish that seek to prey upon the aelves.

This multi-part plastic kit contains the components necessary to assemble 10 Namarti Thralls. Clad in less-ornate armour than their commanders and superiors, as befits their withering souls and disposable nature, they still cut impressive figures – each is powerful and muscular. There are 11 heads in the kit, which can be placed on whichever models you wish; each is hairless and blind, with blank, empty sockets where eyes should be. 10 elaborate neck crests are included, which curve upward and behind their heads, giving the impression of spiked horns. There’s plenty of choice in their weapons – each wields a two-handed lanmari, as follows: 4 can take a choice of glaive or sword, 3 have a choice of axe or sword, 2 carry swords and 1 carries an axe. There is an option for an icon bearer – they have a specific head, and a large mathlann slave rune which forms part of their neck crest. As an added bit of detail the kit comes with 6 pieces of scenery and fish for the bases, which can be added to any model you like..

This kit comes as 90 components, and is supplied with 10 Citadel 32mm Round bases.

Namarti Reavers provide the archers and scouts for the Idoneth Deepkin phalanxes. The Akhelians reco

No troops exemplify the Idoneth Deepkin way of life more than the Akhelian Guard. Mounted atop Fangm

Thrallmasters are cunning and sea-scarred Akhelians who lead the Namarti hosts into battle. Master d