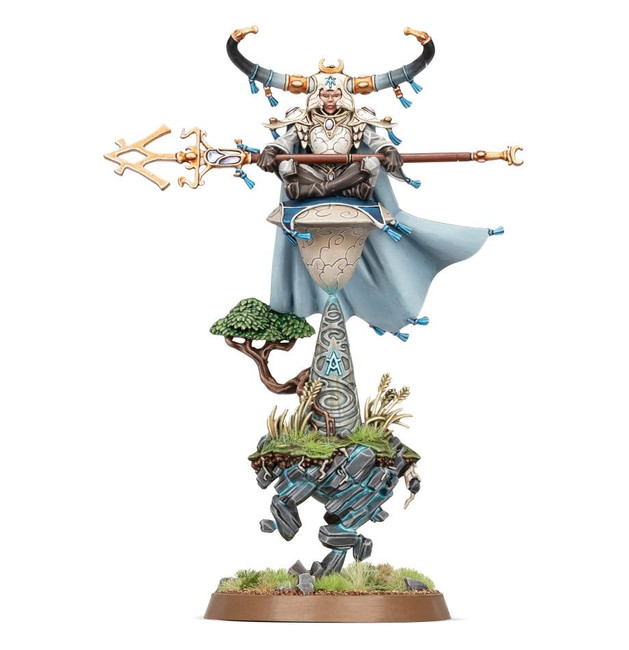 First amongst Teclis’ disciples to learn the ways of the aelementiri, the Stonemages bring the might of the mountain to the battlefield. They can control rocks, boulders and even gravity itself to crush and confound their adversaries.

Alarith Stonemages are vital support spellcasters in a Lumineth Realm-lords army, using endless spells, the Lore of the Mountains and gravity itself to destroy enemies and enhance your own forces. They're great on their own or commanding a group of Alarith Stoneguard, allowing them to pierce armour with contemptuous ease.

This kit builds one Alarith Stonemage. supplied in 13 plastic components and packaged with 1x 40mm round base.

The Alarith temples accept the mountain as their master and, in doing so, inherit part of its streng

Although they hail from the Scinari caste, a Loreseeker is one dedicated to mastering the arts of ma

The battlefield glows bright as the Lumineth go to war. These elegant aelves hail from Hysh, the Rea

The mortal worshippers of Chaos gather together in warbands mighty enough to conquer entire nations.

From across the Mortal Realms, disparate warbands make the dark pilgrimage to the Eightpoints, seeki

Orks fall upon their foes like a shouting green avalanche – tooled up with crude, improvised weapons

The air sings with glorious life magic as the children of Alarielle surge into battle. The reborn go

Harbingers of dark months and dead seasons, marauders who stalk through the frozen darkness, the ogo