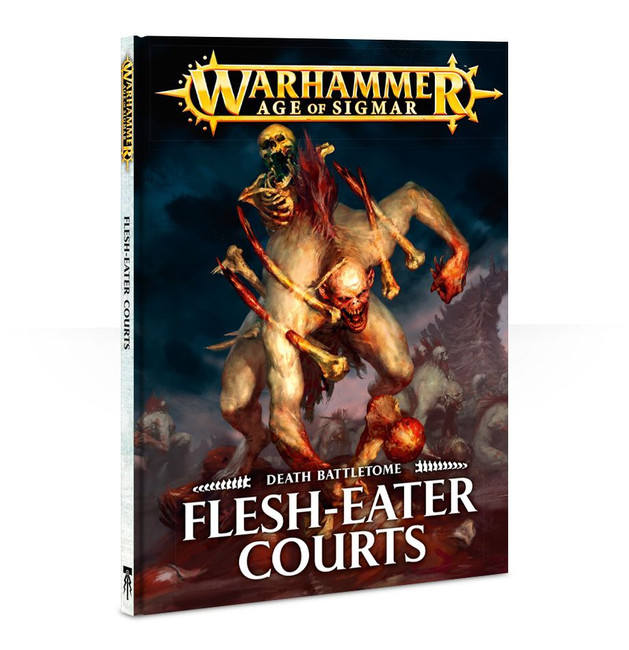 Hidden among the ruins of the Mortal Realms thrive the Flesh-eater Courts. Trapped within a horrific delusion, convinced that their cannibalistic feasts are splendid and grandiose visions of nobility, these courts of madness are each presided over by a malevolent and predatory Abhorrant Ghoul King. Beneath him, Mordants pick at decaying meat, snarling and spitting in guttural growls. Crypt Horrors and Haunters skulk in the shadows as deathless guardians, ready to claim entire corpses as their own.

Ghastly parodies of courtly circles, the Flesh-eater Courts thrive where famine and desolation afflict the Mortal Realms. Desperate mortals soon fall victim to the beguiling visions of plenty the madness of the Courts offers - and the sheer evil of their bloodthirsty rulers is more than eager to use these unfortunates to spread Death all across the Realms…

- a huge amount of information including the history and organisation of the Flesh-eater Courts, their vile actions and motivations, with full background for every unit, character and monster in the faction;- three Battleplans - new ways to play Warhammer Age of Sigmar, with special rules and situations;- twelve warscrolls – one for each miniature in the Flesh-eater Courts range;- an incredible showcase of beautifully-painted Citadel miniatures;- the full rules for Warhammer Age of Sigmar - play right away!

Formed from the bones of those killed by an abhorrant’s insane magic, a Charnel Throne exudes madnes

Bound by the madness of their kings, the Flesh-eater Courts surge across the land in search of their

Unleash the malignant magic of the Flesh-eater Courts with these endless spells! Each is a summoned