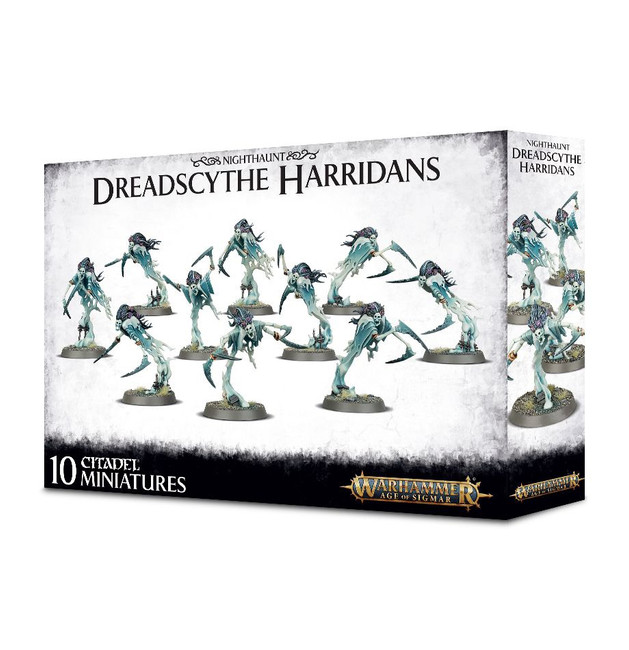 Where once Dreadscythe Harridans were healers and nurturers, the Harridan Curse – dealt as a terrible reward by Nagash – reshapes them in death into something quite the opposite of what they once were. Where there were once healing hands, bonescythes grow; horrible reaping instruments meant for murder, borne by now-raging killers for whom the sight of blood is an inspiring vision spurring them on to further fury. While they retain memories of life, they cannot control their actions – each bears full witness to the atrocities they commit, yet can do nothing to halt.

This multi-part plastic kit contains the components necessary to assemble 10 Dreadscythe Harridans. Particularly horrible and tragic even for Nighthaunt, They are tortured and twisted forms, rising as ethereal spirits whose emaciated arms peek out from beneath their cowls. These arms are their weapons – from the wrist onward, each becomes a curved, serrated scythe blade, growing out at a right-angle for maximum reaping efficiency. Each features a morbid, grinning skull for a head, above which long hair billows behind them, with beautiful roses ironically entwined. 4 of these models feature an alternate right arm, allowing for some uniqueness when assembling, and you have the option to build 2 Slasher Crones – these are the unit leaders of the Dreadscythe Harridans, and can be distinguished easily as they feature 4 arms instead of 2. They each feature graveyard detritus – pieces of rock, wrought iron – by which they attach to their bases.

This kit comes as 40 components, and is supplied with 10 Citadel 32mm Round bases.

The Black Coaches are funerary carriages from the underworlds. Within these arcane carriages any tan

Moving like a ghostly cyclone, the creatures known as Bladegheist Revenants spin in a frenetic fashi

An indomitable new malevolence has stirred an ancient terror. No longer content to hunt civilisation