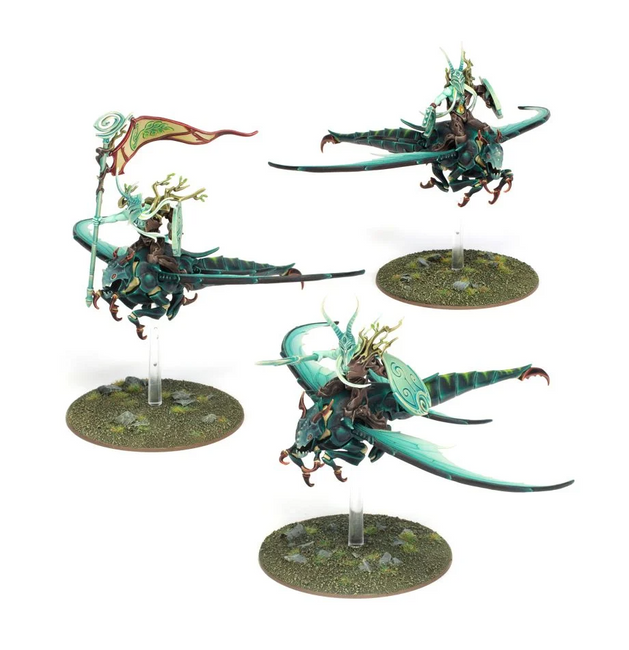 or make 4 interest-free payments of $31.00 NZD fortnightly with

The Spiterider Lancers are Alarielle's elite cavalry, mounted upon agile Dragonspites whose bodies thrum with the energies of Life. Taming one of these ancient insectoid predators is a quest in itself – their forest spirit riders deftly swoop and whirl above the battlefield before suddenly diving into a charge, striking the enemy lines with shocking force. The enemies of the Everqueen are left with nowhere to hide when the Spiterider Lancers are unleashed from the vales.

This multipart plastic kit builds three Spiterider Lancers, forest spirits mounted atop insectoid dragonspites. Wearing knightly horned helms and armed with long magical spears, these elite cavalry fighters can soar across massive distances into a devastating charge, and are infused with vital energies that allow them to repair all but the most grievous wounds. One Spiterider Lancer can be assembled as a Spiterider Scion unit leader, another as a Banner Bearer, and another as a Hornblower. The kit includes a variety of shield designs, heads, and different ways to assemble each dragonspite, as well as a choice of two different instruments for your Hornblower, so no two units need look the same. This set can alternatively be assembled as Revenant Seekers.

It is the duty of the Revenant Seekers to harvest the lamentiri of those Sylvaneth who fall in battle, and return those memory-laden soulseeds to the groves of their clan. To this end, they travel upon swift dragonspites whose bodies thrum with with the power of Life, and wield sickles redolent with the reaping energies of the harvest. The grim dirge of the Seekers is heard where the fighting is thickest, bringing life to the slain and death to the enemy.

A breed of forest spirit only recently-emerged into the ranks of the Sylvaneth, the Gossamid Archers

Strange and fey are the Sylvaneth, children of the life goddess Alarielle. These forest spirits have

Release Date 27th August 2022 The Lady of Vines is the literal hand of Alarielle, cut from the godde